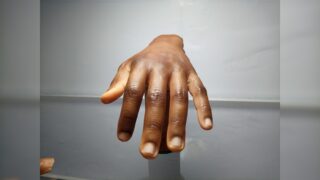 Living with amputations is challenging. It’s hard enough to need to re-learn locomotion and other natural habits. Amputees also struggle with acceptance and inclusion in society. Prostheses tackle both problems, making them one of the most potent coping systems for amputees today. However, the prosthesis market largely excludes Africans. The World Health Organization estimates 30 million people in emerging economies live with amputated limbs, and only five per cent of them have access to prosthetics. But even worse, dark skin tones are largely ignored in global production. White people are often the focus of the prosthesis market. Consequently, Africans have been using prosthetics that do not match their skin colour. John Amanam, the founder of Immortal Cosmetic Art, is plugging this gap by creating hyper-realistic prostheses for darker skin tones.

John Amanam is a Nigerian sculptor and prosthetic artist from Uyo, Akwa-Ibom state. Before founding Immortal Cosmetic Art, he used to be a movie special effects artist. Amanam’s innovation — which spans prosthetic hands, legs, fingers, toes, ears, noses, and breasts — was so rare that he registered a patent over his innovation in Nigeria last year. However, his work, which has thrilled many Africans, comes with a backstory.

Amanam is not your everyday artist. Art transcends craft, and even passion, for him — it’s a part of his bloodline. According to him, he was born an artist. “Art is hereditary for me”, Amanam said in an interview with Ventures Africa. “My grandparents were artists, and so was my father. I come from a family of artists, so it runs through our blood.” But that wasn’t enough for John. He wanted to study arts to become a professional. Ironically, his art savvy parents did not consent. “My parents did not want me to study arts because they did not believe the profession was lucrative at the time,” he said. “That led me to study philosophy, but I only did it for two years before switching to arts.”

Amanam always knew he wanted to be an artist. But he did not know that he would one day be a prosthetic innovator. “I never thought of producing prostheses in my life until I had a problem. My brother had an accident that led to amputation. Then we tried to import a prosthesis for him, but they were all white skin tones. I somehow thought black prostheses were already in vogue. I thought there was someone else or some other company making them. I thought maybe I just couldn’t find them. I then decided to make one for him myself. I started researching and then became passionate about prostheses. Before then, I did not know black prostheses were not in the market. It was after I started getting calls and recommendations that I knew I was the only one doing it.”

Amanam quickly saw that his solution had high demand and no supply. Then a blend of compassion and entrepreneurial instinct made him rise to the challenge. “The fact that no one was doing it here in Africa made me see it as a serious business. I saw it as an opportunity to solve a serious problem. We went through a lot trying to order from outside the continent, and it made me uncomfortable. I imagined how other people in our shoes would feel. I knew the stress, financial implications and all-around complications involved. And that gave birth to my quest to solve this need for people.”

Being the single solution to a Pan African problem is great. But it is also a tremendous responsibility.

Amanam’s work has garnered the attention of the international press, with stories by Reuters, Al Jazeera, and other leading publications. However, being a pioneer is not exactly a fairytale. It comes with a few challenges, the first of them being knowledge. Amanam’s artworks are inspired by legends such as Leonardo DaVinci, but there was practically no one to look up to in making prosthetics. “As a company, we had no source of information. We had to become our teachers, students and masters at the same time,” he said.

Also, the novelty of his product requires Amanam to handle his supply chain. Since no one does his kind of work, no one is in the business of supplying the needed materials. “Most of the materials we use are imported. We don’t have companies producing and refining these materials here in Africa. So we have to do all that work ourselves,” he explained. Importing materials also comes with cost effects. “It makes it difficult for us to reach down to the grassroots. I would love it if people in rural communities could use our works. But the materials are quite expensive. That would be achievable with government intervention and voluntary partnerships. Rural areas are a huge market, and that’s more than we can meet on our own.”

Amanam is not wrong. Africa still has a large rural population. In Nigeria, Amanam’s home country, nearly half (48 per cent) of the population live in rural communities. Meanwhile, Amanam’s production team currently consists of only seven handcrafters. Starting this kind of venture also needs a lot of capital, which Amanam asserted. “Initially, we needed investors. But then we realized that was not the priority at that time. We had to do our homework, which included getting patents and trademarks. I think, at this point, we are now better placed to receive investments.”

Being the single solution to a Pan African problem is great. But it is also a tremendous responsibility. “We have clients from almost 50 countries. We have challenges having them visit us amid Covid restrictions and security challenges,” Amanam said. Nevertheless, he is relentless. His drive to meet people’s prosthetic needs is louder than his calm, baritone voice. “We’ve encountered challenges, but none of them can stop us. Instead, we’ve learnt a lot and have gained a lot of exposure,” he said. Amanam is looking to open branches in as many African countries as possible. “We will create branches and have representatives in other countries. So people can reach out to us through these agents, and we don’t have to keep them waiting.”

Amanam also does not rule out competition. He welcomes it. “There will definitely be competition at some point, and that’s fine. There’s always room for improvement. But they have to get approval from me first. I own the patents and trademarks.”