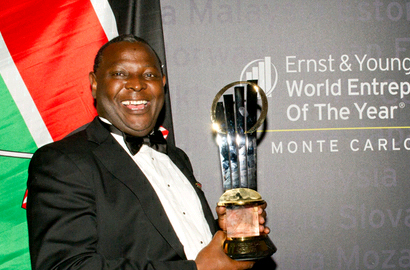 Lessons In Leadership From Ernst & Young World Entrepreneur Of The Year

As of last month, Africa is home to the leading entrepreneur in the world. James Mwangi, the CEO and Managing Director of Kenya’s Equity Bank, was proclaimed the Ernst & Young World Entrepreneur of the Year for 2012, picked from 59 finalists who had already won the award for their home countries. The award recognised Mwangi’s work in transforming the fortunes of his bank.

Back in 1993, Equity Bank was a technically insolvent building society with an asset base of just 28 million shillings ($333, 000), but Mwangi has turned it into a leading all-inclusive commercial bank with assets of over 220 billion shillings ($2.6 billion) and listed on the stock exchanges in both Kenya and Uganda. It is the most capitalised bank in East and Central Africa. It has the largest customer base in East Africa, with regional operations in South Sudan, Uganda, Rwanda and Tanzania. It has nearly 8 million accounts and has nearly 50 percent of all bank accounts in Kenya, with between 3,000 and 5,000 new Equity accounts opened every day. 82 per cent of bank transactions in Kenya are handled by Equity, which also has half the country’s ATMs. Between 2009 and 2010 alone turnover increased by 32 percent and assets by 42 percent. It has attracted the largest capital injection – worth $180 million – in the history of East and Central Africa, from private investment firm Helios EB. In 2011, pre-tax profit surged 42 percent to $150 million, making it Kenya’s second-most profitable bank after Kenya Commercial Bank.

Mwangi believes that Equity Bank has achieved the success it has by retaining a strong commitment to its mission statement: “To be the champion of the socio-economic prosperity of the people of Africa”. “Focus on your vision,” he advises. “Most of us get distracted and make our core business reacting to competitors. Focus on the customers. Ultimately, the competition is about the customers. It is not about the technology.”

Constant awareness of this mission statement and the need for adapting to the requirements of the customers has been Mwangi’s biggest achievement with Equity. The bank’s aim is to transform the lives and livelihoods of Africans, socially and economically, by giving them access to financial services that can maximise their opportunities. Part of the reason for the bank’s great strides has been its partnership with what it calls the “bottom of the pyramid”. It offers financial services for individuals, as well as small and micro businesses, with an emphasis on those with low incomes and the unbanked. 78 percent of Equity’s account holders were previously unbanked. Mwangi has been the main driver behind this switch to microfinance, whereby Equity has focused exclusively on the part of the population that had historically been excluded from formal sources of capital. He has managed to create a booming business by lending to people with deposits of less than $200 and little collateral beyond the potential disgrace of letting friends down. More than three quarters of the bank’s loans are unsecured by collateral.

“From the onset, we recognised that financial access is a necessity for growth,” he says.

Approximately one third of Equity’s loans in 2011 were non-collaterised payday advances for as little as $12 for civil servants who agreed to repay the loans with 10 percent interest taken out of their next paycheque. Another 11 per cent were to small enterprises such as fruit-stands, used-clothing racks and hair salons, with collateral including anything from furniture, household appliances or business assets. Upon repayment, borrowers can qualify for loans of increasing amounts. These methods are common at non-profit organisations, but Mwangi’s great success has been making them profitable for Equity.

Indeed, it has proven to be the making of the bank, and of Mwangi. It is one that leverages societal mores and shame, and has demonstrated that these are often the strongest collateral that can be found on a continent where formal credit records are scarce beyond the biggest cities. “If a woman secures a mortgage with her matrimonial bed, she will never default,” says Mwangi. “And other women will support her just to ensure that that matrimonial bed is not removed when the husband is not there. Here, social relationships are more valuable than economic relationships.” Mwangi says that in the field of microlending the main competition is not so much other banks but the bedroom mattresses where many Africans store their savings. There is certainly room for more growth using this model, with 80 per cent – 326 million people – of Africa’s population unbanked. At the moment Equity has almost a clear run in the field, with only 25 African microfinance institutions having assets greater than $30 million. Other Kenyan banks are expanding their customer bases by targeting small borrowers in the informal economy, but none have yet caught up.

And Mwangi has no plans to let them, professing to have big plans for the further development of the bank.

“We want to be an international bank that is a local bank in every community,” he says. Not even the global financial stress that has seen 15 top global banks downgraded by credit rating agency Moody’s can dampen his fervour, as he believes local banks have proved resilient to these problems and will even increase their ratings.

“Equity’s ranking in November last year was enhanced by the global credit rating,” he says. “African banks and specifically Kenyan banks were not holding the toxic assets that caused the crisis during the financial downturn.”

On average, about 95 percent of liabilities in African banks are to domestic residents, mostly in the form of deposits, with Mwangi believing domestic savings to be crucial to the country’s growth.

“It is essential that while we tap global markets for long term debts, funding for significant projects, to remember that fundamentally the long term sustainability of our development agenda is dependent on domestic savings,” he says.

Mwangi also is chairman of the Equity Group Foundation, which focuses on African development and has partnered with the MasterCard Foundation to form the largest Secondary Education and Leadership Scholarship Program in Africa. With 60 per cent of Kenya’s population under the age of 30 and a 40 percent unemployment rate, the foundation is right to focus on youth. It also has a strong focus on the informal sector, which accounts for 94 percent of Kenya’s GDP. Mwangi has been working to evolve peasant farming, which accounts for most of the economy, into commercial small-scale farming. Equity offers a range of credit facilities specifically tailored to the needs of these small-scale farmers, as well as large-scale farmers and agribusinesses.

Constant innovation is also at the centre of Mwangi’s transformation of the bank. Equity has invested in an IT platform that can accommodate 35 million accounts, as well as a level four data centre that is one of a kind in sub-Saharan Africa. He has also presided over innovations such as M-Kesho, the first mobile-centric bank account in the world, and Orange Money, a mobile money platform for Orange subscribers.

Mwangi’s leadership style has been crucial to Equity’s success. He redefined the vision and mission of the bank and made it pervasive within the organisation. Training was scaled up in order to boost performance, while he has also delegated responsibility, created incremental challenges, rewarded performance, flattened the organisational structure and changed the corporate culture.

“Having won this award from Africa, I want to tell the international community that Africa is ready for investment,” stated Mwangi. “Africa has the opportunities and is the fastest growing continent and consequently the remaining frontier for those that want to succeed in entrepreneurship.”

“At a personal level, this award recognises the Equity Bank model. More critically, however, the award shows that Africa is on the rise and Kenya offers an environment for business success.”

“Equity has succeeded because I believe in the gospel of social and economic transformation of our people.”