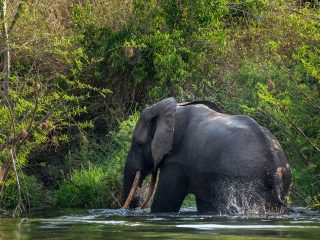 The inability of the Democratic Republic of Congo (DRC) to harness its huge hydro-electricity potential at a faster rate is putting the country’s vast forest resources at risk, President Felix Tshisekedi has warned.

At 500 million acres, the Congo Basin forest is the second-largest tropical forest in the world and plays a crucial role in countering global warming. The forest absorbs global carbon emissions together with the Amazon and South American rain forests.

The forest, which covers two-thirds of the DRC or around 1.5 million kilometres (km) square, is threatened by the production of charcoal, a key energy resource for inhabitants because of the lack of electricity supplies. A colossal 40 million people depend on the Congo Basin for their livelihoods and over time, the expansion of industrial logging has posed a great threat to their lives and wellbeing.

The lack of programs to deliver clean and renewable energy is a direct threat to the country’s forests, President Tshisekedi said. This is because more than 90 percent of the energy consumed in the DRC comes from wood. “At the current pace of population growth and energy demands, our forests risk extinction by 2100,” Tshisekedi declared at an energy forum this week.

Regarding the huge untapped hydropower potential the DRC possesses, the leader said the country must get past the “paradox of being a country that is one of the world’s top five in hydroelectric potential but one that ranks among the worst in access to electricity.”

According to the International Hydropower Association (IHA), DRC hosts the largest concentration of hydropower potential in the world at the Inga Falls, about 150 km from the mouth of the Congo River. With this, the country could provide a significant portion – up to 40 percent – of Africa’s electricity demand but harnessing that potential has not been particularly easy.

Late last year, DRC authorities announced a deal for a Spanish-Chinese consortium to develop the Inga 3 hydro-electric mega-dam project on the Congo River rapids, which is one of the world’s most powerful and centre to the country’s energy plans. The country presently has two Inga projects that were completed in the 1970s and 1980s respectively.

However, the $12 billion project which has been on the cards for many years, and part of the proposed Grand Inga project, has faced significant barriers to progress. IHA says that the plans have been revised several times to increase the likelihood of attracting sufficient finance in today’s investment climate. Originally envisioned in the 1950s, the current Inga site plans include a total of eight power stations, two of which are completed (Inga 1 and 2).

The plan has also been delayed by likely local impact of the hydroelectric project, expected to be Africa’s largest, with both residents and environmental activists expressing concerns, as well as experts doubting its viability.

In 2013, independent economist, Ian Cruickshanks said that although the project would provide sub-Saharan Africa with cheaper and cleaner electricity than is currently produced in coal power stations, transporting it to the southern part of Africa would be a challenge.

“My one concern follows experiences of the Cahora Bassa Dam project on the Zambezi River in Mozambique. It generates electricity, but the transmission to customers in South Africa isn’t efficient,” Cruickshanks said. Apart from transmission challenges, he also pointed out the huge security problem of giant power lines running across the DRC, which is “at war with itself.”

Another analyst noted that the project’s size, the complex political landscape as well as problems of the DRC and the region were key obstacles in the implementation of the project. “The DRC is politically unstable, there is rampant corruption and it lacks credible institutions. These factors hinder the implementation of a long-term multi-billion dollar project,” Senior Research and Strategy Analyst at Frontier Advisory, Simon Schaefer, said some years ago.

As observed by analysts, a major and recurrent barrier to implementing the hydropower project after many years of conception was the political instability in the DRC. With relative stability now in the country after President Tshisekedi came into power earlier this year, the DRC has to move fast to save Africa’s endangered forest resources, which also suffers from illegal logging.

The Congo Basin is Africa’s largest contiguous forest and the second-largest tropical rainforest in the world. Along with the Democratic Republic of Congo (DRC), the swamp-struck tropical forest covers portions of Cameroon, Central African Republic (CAR), Republic of the Congo, Equatorial Guinea, and Gabon, spanning about 695,000 square miles.