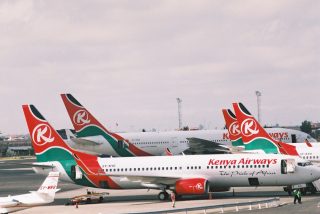 Kenya Airways (KQ) has announced plans to lay off workers in an attempt to survive the economic impact of the COVID-19 crisis.

The aviation industry has been greatly affected by the virus and awaits an uncertain nationalisation process. This has left Kenya’s struggling air carrier unable to fulfil its obligations and maintain operations.

In a memo addressed to workers, KQ chief executive Allan Kilavuka said “a decision has been reached to carry out an organisation-wide right sizing exercise which will result in a reduction of our network, our assets and our staff.”

“Effectively, we have commenced a phased staff rationalisation process, which we expect to conclude by September 30 2020,”  he said.

According to Kilavuka, a large part of the airline’s fleet will remain grounded even after it resumes gradual flights intended to commence in August.

The airline had a workforce estimated at 4,000 and operated a fleet of 36 to 54 global destinations. As the industry starts to rebound, KQ will operate a reduced network when services resume.

Prior to the pandemic, the airline has been facing financial difficulties in its operations, owing to the number of losses and debt.  In December 2019, the airline issued a profit warning, signalling that its losses widened to $129.7 million from $75.8 million in 2018.

Subsequently, staff costs in 2019 rose by $9.1 million to $158 million as the carriers total operating costs surged to $1.3 billion on the back of increased operations and changes in accounting estimates.

In a bid to save KQ from bankruptcy, Kenya’s parliament approved a nationalisation plan. This led to the creation of a special purpose vehicle, Aviation Holding Company (AHC) to manage Kenya’s aviation sector.

KQ’s stock was also suspended from trading on the Nairobi Securities Exchange for three months effective July 3 to pave way for the planned takeover by the government. This is in line with the publication of the National Management Aviation Bill 2020 on June 18, 2020.

For KQ, it’s  short and medium-term survival is based solely on the company’s ability to restructure its operations. This will give room for the airline to scale up again.