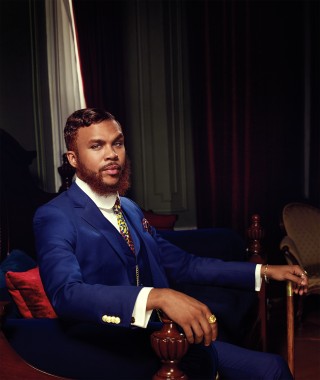 Jidenna Theodore Mobisson, commonly known as Jidenna may finally be able to ward off  the recent backlash from Nigerians after his controversial interview with urban news channel VladTV. Starring Jessica Chibueze & Jidenna who are both Nigerians, the All Things Ankara site – a platform founded by Nikki Billie Jean has produced an editorial in honor of their  “Nigerian Renaissance” theme. The “All Things Ankara Ball” which is in commemoration with Nigeria’s 55th independence day celebration on October 1st, marks its first ever official inaugural.

The campaign images feature a combination of French Renaissance, Nigerian and other African aesthetics. Also featured is a pair, along with a few guards, flower bearers and ladies-in-waiting, with a setting which bears a close resemblance to the famous Chateau de Versailles. The official slogan for the All Things Ankara Ball is a phrase derived from Fear & Fancy (a social club co-founded by Jidenna), “Come Dry, Leave Wet”. It simply means going to a party dressed to the nines;“to perfection in the most fashionable attire” (Come Dry) but having a good time, dancing and sweating out your clothing (Leave Wet). This event also gives Jidenna, who loves to incorporate African prints into his ‘classic’ style, an opportunity to justify himself as someone who is in fact proud of his Nigerian heritage.

During his infamous interview with VladTV, the rapper shared his experience of burying his father years prior, “Our family was light. Therefore when we go to our village… and when I actually buried my father, I had to bring a lot of AK47s. Because when you’re light skinned, you’re heavier target for being kidnapped. Because you’re seen as more valuable. For me being light skinned in Nigeria, in my family, it was difficult. It was always challenging. We were hounded. We were robbed.” However, his comments- specifically those related to his skin tone sparked a controversy on Twitter Nigeria, providing a base for momentary national bonding. As a blogger puts it, his comments “FINALLY led to a unified Nigeria for the first time since the election started and ended.”