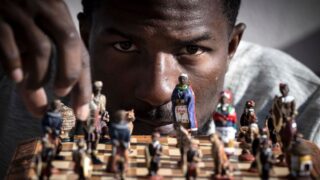 Is Africa due for a gaming industry boom? Teddy Kossoko answers.

One evening in March 1889, U.S Senator William Evarts was returning from work when a street fakir shilled him a ‘mobile’ board game named ‘Pigs in Clover.’ He bought the game to get rid of him, as he just wanted to go home. But after he got home, he tried playing it and became hooked. He spent so much time with it that he was late to the following morning’s senate meeting. He took the game with him to that meeting, and before long, other senators started playing it and became just as addicted. That game, created by Charles Crandall, became the first viral mobile game. It was simply a circular puzzle to put balls (which represented pigs) in a hole (the clover). However, it carried enough cultural and historical relevance to tell people that pig farming was a popular venture in the United States in those days.

Games have always been a potent medium for telling stories and preserving culture. Long before the rise of Candy Crush and Wordle, many viral video games have become gateways to Western culture, such as The Sims and Grand Theft Auto. However, no game focused on the second-largest continent has gone nearly as viral as Pigs in Clovers. The problem is not that Africans don’t play games. On the contrary, Africa’s gaming industry generated $590 million in revenue last year, according to a Newzoo report. The same report also shows that Sub-Saharan Africa is the fastest-growing region globally for mobile gamers. However, you can barely find games centred around Africa.

Teddy Kossoko decided to solve this by starting Masseka Games, where he uses video games to deliver his message and introduce people to Africa. From his Toulouse apartment on avenue de Muret, Kossoko is in contact with Cameroon and Senegal, where some of his graphic designers and developers are based, and, of course, with the Central African Republic, his country of birth. To create his games, the 27-year-old developer works with historians from France’s National Center for Scientific Research (CNRS) to set his fictional plots in the most authentic cultural landscape possible.

As a child, Kossoko did not dream of becoming a game developer. He wanted to become a medical doctor. But his perspective changed after obtaining two baccalauréats (a French and a Central African Republic baccalauréat). “I didn’t see myself spending eight years studying before working,” he said. “I wanted to start creating and changing the world, so I shifted to computer science.” According to Kossoko, his French baccalauréat opened the door for him to study in France, where everything changed for him.

Kossoko wasn’t a gamer. But after he arrived at Blagnac IUT (University Institute of Technology), he started touring Europe to explore new cultures. He soon discovered that most people did not understand Africa. “In France, I noticed four things quickly: Many people did not know that my country exists; for many people, Africa is like some black box, and they do not know what is going on here. That blocks a lot of opportunities. I also noticed that video games in the West are a powerful medium that can capture people’s attention; and despite the development in Africa of smartphones, the world of video games is struggling to develop here,” he said.

In 2018, he launched ‘Kissoro Tribal Game’, the world’s first 100 per cent African mobile game. Kissoro is an African strategy game belonging to the ‘Mancala’ family of board games, and Africans have played it for centuries. Each player aims to capture all of an opponent’s pawns to stop them from moving. Kossoko uses African folklore in all his games to give them rich cultural settings.

The original Kissoro board game has different names in different tribes. For example, it is known as omweso in Luganda, orusoro in Runyoro/Rutoro, ekishoro in Rukiga, coro in Langi and Acholi, soro in Alur, Lugbra, Madi and Kakwa, or mbao or kombe in Kiswahili.

Kossoko themed the mobile game around African conflicts, making it about two kingdoms that have fought for years to control a river rich in gold. “I experienced two coup d’etat. The conflict separated me from my father, who had to leave the country. I also saw how much my mother had to fight to give me a good education. So I know a little about conflicts in Africa.” Before its official launch, the Kissoro Tribal game won the ‘Pitch Your Game of the Geek Touch’ and the Tongolo Awards in 2017. After its launch, Kossoko joined Forbes Africa’s 30 under 30. Today, Masseka Games has users in 18 countries globally. Kossoko has created other games after Kissoro. One of them is Golden Georges, a football game with a storyline inspired by George Weah, the only African to win the Ballon d’Or.

“For me, video games are just tools to tell people about Africa. Computer science is also a tool for solving problems. People also use movies and books, and maybe one day, I’ll do that too,” he said. Kossoko is still exploring other ways to build African games. One of them is a chess game with African characters.

But building games for Africa is not a walk in the park. Despite the large market, Kossoko admits that monetising games is challenging. “The African market is very complex,” he said. “What works for Congo might not work for Kenya, and what works in Kenya might not work in South Africa. So creating a product you can monetise everywhere is challenging.” Also, convincing investors was tasking at the beginning. “Many investors did not believe anything was happening in Africa,” he said. Another challenge is training other young Africans to become professional game developers, primarily because it requires resources.

Masseka Games is one of several emerging African gaming studios redefining the space. Many of them face the same challenges. Nevertheless, Kossoko is optimistic that Africa’s gaming industry is due for a boom. “I see a movement happening,” he said. “We have a new generation of African youth working hard to create solutions. It’s only a matter of time before everything changes.”