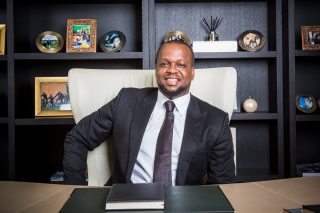 The GIPLC Golden Heart Award has been instituted and endowed as a means to annually appreciate and honour men and women (from all nations worldwide) who have shown remarkable, tangible and exemplary care and support to vulnerable children across the world. GIPLC, founded by Nigerian humanitarian Nuhu Kwajafa, is a charity organization that supports children. In the last 14yrs, GIPLC has raised over $5 million for children with critical medical conditions.

Of GIPLC’s numerous interventions over the years, perhaps the most popular was the case of Ali Ahmadu Chibok who was run over by a motorcycle ridden by Boko Haram terrorists when they invaded his village in Chibok, Borno state, in 2014. Ali, who was only 4 years old at the time, was left paralysed. The incident had left the young Ali devastated and almost hopeless. Nigerian doctors ruled that Ali would never walk again due to severe spinal cord injuries. After GIPLC contacted some hospitals in the US, UK and Dubai, they discovered a Dubai hospital that offered corrective surgery for Ali. Sanomi’s Dickens Sanomi’s foundation facilitated in conjunction with GIPLC the corrective surgery and pledged its sponsorship of Ali’s education up to the University level. Ali has been fully recovered for several years and is attending his school activities in Abuja-Nigeria.

Sanomi was named the first recipient of the award on account of his exemplary kindness and massive support for the less privileged. This year’s maiden award was presented to Igho Sanomi by Ali Ahmadu Chibok during GIPLC’s annual December 2022 Christmas/End of Year party for 2000 orphans in Abuja on Sunday, the 11th of December 2022.

“We, therefore, recognize your exemplary kindness and massive support for the less privileged that has saved so many lives across Nigeria and beyond, and appreciate you so much more than our awards can ever express,” GIPLC’s coordinator Nuhu Kwajafa said in a letter to Sanomi which was made available to the press.

Igho Sanomi, one of Nigeria’s most successful business leaders, is also one of its most charitable philanthropists. The Dickens Sanomi Foundation, named after his late father, funds initiatives in education, social welfare and the arts. Sanomi, 47, is the founder of Taleveras, a leading energy trader with operations in the UAE, Europe and Africa.