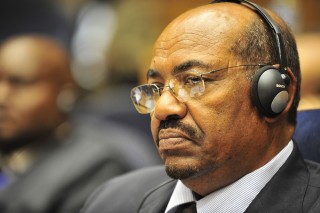 Sudan’s Bashir: “Should I Stay or Should I Go Now?”

When I first saw the #Bashir Twitter Feed this morning, an old song by the Clash came to mind:

“Should I stay or should I go now

If I stay there will be trouble

If I go there will be double…”

On Sunday, a human rights group, the Southern African Litigation Centre (SALC) secured a ruling by the North Gauteng High Court to hear a motion for President Omar Al-Bashir to be arrested for the International Criminal Court (ICC) charges of war crimes. Bashir is in South Africa for the African Union Summit in Johnnesburg.

Interestingly, Bashir did not attend the funeral of the late Nelson Mandela. He also skipped the inauguration of South African President Jacob Zuma – likely because of these charges. Zuma, however, accepted Bashir’s invitation to visit Khartoum earlier this year in January. During his trip, the South African President lavished praise on his “Sudanese brother” for Sudan’s leading role in Africa’s independence movement as well as its support for South Africa’s anti-apartheid crusade. Bashir reciprocated by extolling South Africa’s leadership in agricultural, industrial, and mining technologies and expressing the desire to strengthen ties and develop potential partnerships between the two nations. Both leaders confirmed their support for the United Nations (UN) and the African Union (AU) as international and regional entities pivotal to facilitating progress in Africa.

Based on this weekend’s news, South Africa’s government now faces an interesting diplomatic conundrum. Should it align itself with the ICC, a UN body (of which it is a member and signatory), or should it defy the ICC in favor of the AU which believes the ICC is unabashedly biased against African leaders such as Bashir and Kenya’s president Uhuru Kenyatta (who has been previously charged with crimes by the ICC)?

Since Bashir seized power in 1989, Sudan’s international reputation has plummeted and its domestic situation has deteriorated. Sudan is now in a state of economic collapse with a deathly combination of hyper-inflation and hard currency shortages alongside a violent devaluation of its currency. International sanctions lead by the United States and a US State Department listing as a state sponsor of terrorism, after having harbored both Osama bin Laden as well as Carlos the Jackal, has hardly helped. There is the long simmering civil war that ended with a referendum and now newly-independent South Sudan, but only after killing two million people and displacing four million more. There is the conflict in Darfur, for which Bashir has been charged for war crimes by the ICC, which is fueled by the Bashir’s government’s Janjaweed forces and his elite Rapid Response Service (RSS). The tragedy in Durfur has already claimed 400,000 lives and displaced over 2.5 million people. The numbers are still rising.

There are ample reasons that Bashir needs to be held accountable for something. There are also many reasons why South Africa should hand Bashir over to the ICC, regardless of how one feels about the international body. However, considering the diplomatic firestorm that would follow if such an event occurred, it’s safe to say that Bashir will likely go home. Still it is heartening that a third party human rights group, the SALC, has dared to take the steps to hold Bashir accountable when no other entity has even tried. The SALC has looked beyond issues of power, patronage, and favoritism and done something that no one, until now, has done, which is to give the disenfranchised and beleaguered people of Darfur some hope of a concept in short supply in this whole fiasco – accountability. For the SALC to cut through the haze of talk and take a direct action is exceedingly remarkable.

While the AU Summit is abuzz over Sudan’s Bashir and with all ports of exit in South Africa now closed to Bashir until his hearing is completed, the SALC has Bashir dancing to the tune of “Should I stay or should I go now”. I bet he wishes he never left Khartoum.