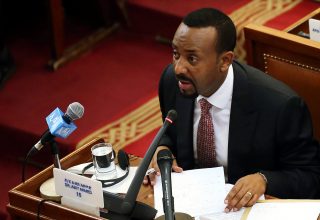 The government of Ethiopia’s reformist Prime Minister, Abiy Ahmed has adopted a policy to introduce four additional working languages alongside Amharic in the horn of Africa nation. The new languages adopted include Afan Oromo, Afar, Somali, and Tigrigna. The five languages are Afroasiatic.

According to Befeqadu Z. Hailu, a former political prisoner and Head of the Centre for Advancement of Rights and Democracy in Ethiopia, “Introducing additional working languages is a commendable action.” He added that the decision has been long overdue.

Amharic, which is the official language of Ethiopia, is its second most spoken language. The language has more than 21 million native speakers and about 4 million second-language speakers, that is, 29 percent speakers in the country.

Ethiopia is a nation that is largely disturbed by internal conflicts which are mostly caused by tribal sentiments which later breeds ethnic extremism. The new working languages are expected to reduce ethnic extremism and play a role in nation-building and unity.

In a statement, the 43-year-old Prime Minister said that Amharic (has) played a big role in facilitating communications among Ethiopians. He added that in order to build a society that is integrated both politically and economically, introducing new working languages were very important. In his words, “The new languages would play a big role in uniting the country and further improve cultural ties among Ethiopians.”

While most people have welcomed the development as a step towards creating a sense of significance to the minority ethnic groups, a few others still express their scepticism.

“It might take more time considering the financial obligation the commitment requires,” reads an anonymous statement by a prominent member of Abiy’s Prosperity Party. Also commenting scepticism on the matter in a statement, the Oromo Liberation Front (OLF) said, “we still doubt the execution of the new policy and how is it going to be put into practice.”

Before Abiy took over the reins of power, OLF was tagged a terrorist group in Ethiopia.

Since April 2018, Abiy has implemented radical social-political changes ushered in an era of transformation for Ethiopia. Amongst the reforms since are the release of political prisoners, constructive engagement of opposition parties and radical economic, diplomatic policies, granting of amnesty to several individuals and groups, most of which were convicted of treason, charged for crimes against the constitutional order and armed struggle.

Most importantly, his decision to restore peace between the country and its neighbouring Eritrea after decades of bitter conflict was an important move that won him the Nobel Peace Prize in December 2019.