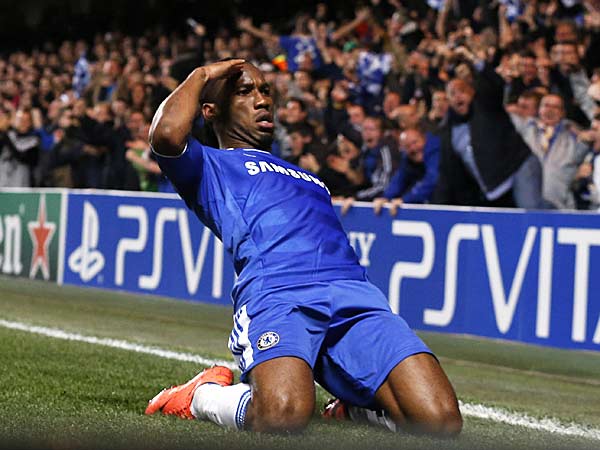 Drogba: Barca Draw Is One Of My Best Nights

Ivorian captain and Chelsea of England Striker, Didier Drogba, says he and his Chelsea teammates are proud of reaching the finals of the UEFA Champions League after their dramatic 2 : 2 draw with defending champions Barcelona at Camp Nou on Tuesday.

The former African Footballer of the Year was a menace all through the 90 minutes against Pep Guardiola’s team despite conceding a second half penalty that could have proved costly. But speaking to Chelsea TV, Drogba reckons the result was one they need to be proud of, as it was one of the best.

“We have to be proud. We have done it in the past. It was a good game and we have always managed to score. It’s one of the best results against one of the best teams in the world. Nobody expected us to be here.”

Drogba also added that the 2:2 draw with Barca was one that would live long in his memories.

“I think it’s going to be one of the best nights I had in my career. I hope there is more to come. It’s a great night for the Chelsea fans, they came here and we are happy for them. I can still hear them singing,” he said smiling.

Meanwhile, the 34 year old is already looking forward to the final against either Bayern Munich or Real Madrid, in which Chelsea will play without John Terry, Raul Meireles, Branislav Ivanonic ad Ramires due to suspension. However Drogba insists other players are equal to the task and will play for their suspended teammates.

“…it’s part of the game and we are very sad for John (Terry)…We are very happy because we qualified but we keep our feet on the ground because some of our best players are not going to be there for the final- so the final will be difficult but we are going to try to do it for them.”

Drogba is also delighted to be in two-cup finals despite criticisms of his Chelsea side as recent as February.

“Everybody says it is a difficult season but we are in the FA Cup final and the Champions League final and I think everybody would love to be in our situation in two very big finals.”