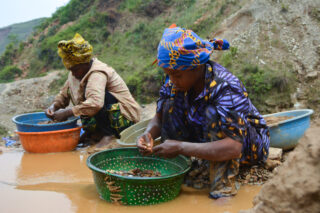 Tenke Fungurume Mine, the DRC-Beijing alliance

Technology is a powerful aspect of modern life. It is redefining not only our thought processes but also how we live. Technology allows us to accomplish a lot in a short period of time without expending a lot of energy. For example, in the 1980s, many Sub-Saharan African households used grindstones and wooden mortars as grinding mills. However, since the early 2000s, more people on the continent have had access to electrical grinding mills and electronic blenders. Back then, it took three months for a mail to be delivered from a village in Edo State (Southern Nigeria) to another in Sokoto State (Northern Nigeria). But that is no longer the case. One can process food with an electronic blender or call people on the other side of the world in seconds. Such is the power of technology to enable people. Several schools of thought contend that technology originated in the West. Although it may appear so, Africa plays a critical role in its current expansion due to significant contributions from natural deposits such as cobalt and copper.

Copper and cobalt in Africa

Copper is a metallic chemical element, easily formed into sheets and wires and is one of the best-known conductors of heat and electricity. The mineral can be found in roofing sheets, plumbing tubes, and electrical products like copper wires, cars and motors. Cobalt is a magnetic, metallic element used in alloys, batteries, and as a pigment in paint and glass. Primarily, it is used in lithium-ion batteries (in most of our smartphones and other rechargeable battery-powered gadgets). These batteries are in electronic cars – the future of cars. Therefore it is imperative to note that some of the world’s largest deposits of copper and cobalt are in Africa.

In Africa, Copper and cobalt can be found in the Central, Southern, Northern and Eastern regions. Substantial deposits have been recorded in the Democratic Republic of Congo (DRC), Madagascar, Morocco, South Africa, Zambia, Uganda, Namibia and Zimbabwe. Globally, DRC is the top producer of cobalt, the fourth-biggest producer of copper and the second largest producer of diamonds. As of 2021, the Central African country accounted for over 60 per cent of the world’s cobalt.

The Tenke Fungurume mine

The Tenke Fungurume Mine (TFM) is Kinshasa’s biggest copper and cobalt mine and one of the world’s top cobalt mines. According to Bloomberg, it accounted for about 14 per cent of global cobalt production last year and is also a significant foreign earner for DRC.

Located in Lualaba Province (formerly Katanga Province), the Tenke Fungurume Mining SA (TFM) is 80 per cent owned by China Molybdenum Co. Ltd (CMOC) and 20 per cent by Gécamines, Congo’s state-owned mining firm. In 2008, stakes in TFM and several other mines were offered to China in exchange for infrastructural development by the former government of President Joseph Kabila. The country had just come out of a military dictatorship that spanned three decades, smeared with a decade-long civil conflict. Scouting for financial aid, Kabila turned to Beijing for help after international lenders turned the country down.

This is how Dr Philippe Tunamsifu Shirambere, Associate Professor and Deputy Dean of the Faculty of Law (research) at the Université Libre des Pays des Grands Lacs (ULPGL-Goma), DRC, puts it in a March 2020  publication on Brill:

After 32 years of a dictatorship regime of Mobutu Sese Seko and a decade of various armed conflicts, the newly elected DRC government (Joseph Kabila) in 2006 was expected to receive $4 billion from the traditional Western donors for reconstruction and development to help cement peace. Based on the issue of the lack of trust in the public institutions, the West failed to provide its promised aid following its conditionality. Alternatively, Kabila approached China (in 2008) to secure his cinq chantiers. Without prior conditionality on good governance and human rights, China agreed to provide its financial support valued at $9 billion in exchange for mines.

But last year, President Felix Tshisekedi’s administration began to review the 2008 contract signed by his predecessor and the reserve levels at the Tenke Fungurume Mine after saying DRC was not getting a fair deal. China had agreed to build roads and hospitals financed by its profits from the country’s cobalt and copper joint venture. But critics argue that only a few of those projects have been completed, escalating a dispute between China’s CMOC and state-owned Gecamines over the Tenke Fungurume Mine.

Recently, a court barred new export deals from the mine until its shareholders agreed on a new sales contract. Gecamines had accused CMOC of lying about its mineral reserves. The state-own minority shareholder claimed that the Chinese partner owes $7.6 billion in royalties and interest.

The Tenke Fungurume Mine (TFM) plays a significant role in the DRC economy. In 2018, TFM paid over $2.5 billion to the public treasury and other administrative services since its inception in 2006. As of December 2020, the mine was estimated to hold 176.8 million tonnes (Mt) of recoverable ore reserves grading 2.1 per cent copper and 0.30 per cent cobalt. It is also projected to sustain 32 years of mining operations at an annual ore production rate of 5.54Mt.

DRC is heavily indebted to China. Between 2000 and 2018, the DCR acquired about 53 loans worth $2.4 billion from China to fund power, transport, and mining projects. The interest on the loans has increased over the years. It has become difficult to repay them either in cash or mineral resources. However, Beijing waived some of the debt owed to it by the DRC in January 2021 to help the central African country overcome the economic fallout from the coronavirus pandemic. Whether the ban on new copper and cobalt export would mar the relationship between Beijing and Kinshasa is not clear.

Mining in DRC is a common means of livelihood for its mountain people. There are 476 named mountains in Congo-Kinshasa with vast untapped mineral wealth. The country ranks among the top mineral-rich nations in the world. According to African Mining IQ, the DRC has an estimated $24 trillion in untapped deposits of cobalt, copper, diamonds, gold, and other minerals like zinc, tin and potash in its copper belt. That explains why DRC has over 100 mining projects, with about 80 per cent in development stages. Foreign investors and companies own most of these projects.

One would think that the influx of foreign mining firms would increase national revenue, urbanise the country, and improve living standards. However, this is not the case because a lack of transparency throughout the mining value chain devastates the economy. As of 2021, the World Bank valued DRC’s Gross Domestic Product (GDP) at $53.96 billion. The GDP value represented less than 0.01 per cent of the world economy. Asides from a lack of transparency, the heavy involvement of unstructured artisanal subsistence mining and middlemen further weakens the value chain.

Artisanal subsistence mining is the informal, often small-scale mining carried out independently by people who mining companies do not officially employ. These artisans lack the right technology, so they use bare hands to mine for precious metals. For example, artisanal miners produce about one-fifth of the global gold supply. Hundreds of thousands of people in DRC, including women and children, work in the artisanal mining sector. Especially in the gold sector. Women play an essential role in the DRC artisanal mining industry. They take on diverse roles, from panning and processing to trading these goods and services. But their economic participation in the sector is downplayed.

According to The Guardian, an estimated 10 million people worked in the artisanal sector across sub-Saharan Africa as of 2019. DRC’s artisanal gold production stood at 14 to 20 tonnes (about $543 million to $812 million) annually. But middlemen who buy from these artisans at lesser prices also rub the government by ‘misinvoicing’ the total value of minerals they export. There is no denying that the Central African nation has enormous mineral wealth and many foreign actors in its mining sector. However, local communities are left with nothing, and compensations are not proportionate to the losses.