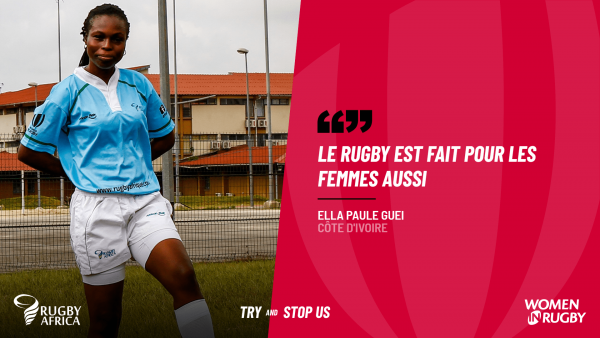 Paule Ella Guei has had to overcome many challenges on her journey to becoming a referee for the Ivorian Rugby Union (FIR). Laughed at for officiating men’s games, she had to develop a thick skin – and was rewarded for her efforts by being selected as a Rugby Africa (www.RugbyAfrique.com) ambassador, and one of 12 Unstoppables on the continent.

Now, Guei has an even greater accolade to her name, with the distinction of an Ivorian Sports Awards Sports+ recognising her efforts to develop rugby in Côte d'Ivoire.

“This award is the proof of the hard work we put in every day for the promotion of gender through rugby,” says Guei. “It is a symbol of the recognition of women's rugby as a discipline to be supported and included into all athletic activities and events. With this award, we have succeeded in positioning women's rugby, which used to go unnoticed, into the list of sports that are worth keeping an eye on in Ivory Coast.”

The award marks the end of a challenging but triumphant year for the dedicated ambassador who refused to let even the disruption of a global pandemic put a stop to her mission to break down stereotypes.

When lockdown restrictions relegated sporting activities to online and personal training programs, Guei also used the opportunity to advance and prepare for a groundbreaking national “Break Down Barriers, Experience the World of Rugby” tour.

The tour, initiated in collaboration with the Ivorian Rugby Federation, is an extension of the highly successful Ivory Coast Rugby Project, which promotes the development of women rugby players in Ivory Coast.

The ‘Break Down Barriers’ tour has several objectives that include and go beyond promoting and supporting women’s rugby, with a focus on advancing the conditions that will allow the women and girls to indulge their passion for the sport. These include recognising and responding to the challenges experienced by the various clubs, providing guidance and creating a climate of trust to stimulate social interactions.

“This tour definitely has had a considerable impact on the girls, because many of them have been able to better deal with the gender stereotypes women in rugby face every day,” affirms Guei. The success of the tour, she adds, is evident in the increase in the number of registered players and the girls’ expressed desire to meet with officials again. “In their eyes, we are a source of inspiration, motivation and self-esteem. Their feedback has truly moved us and pushes us to work harder, and to devote ourselves to the project even more. What a great victory!” she enthuses.

Guei believes her drive and commitment is accelerated by being an Unstoppable, which has considerably raised her profile and platform. “Being an Unstoppable and an ambassador for women's rugby allowed me to figure out what I was really capable of and how far I could go. It is truly wonderful to realise that we can do things beyond what we think or even begin to imagine,” she explains.

“Moreover, our voice is now heard and taken more seriously, not only when it comes to decisions related to the women's commission at the FIR, but also with our professional activities and in our community. We are also constantly getting approached by the media, which allowed us to gain more visibility as we strive to promote gender through rugby.”

Guei’s voice will no doubt be further amplified in 2021, following the mid-January announcement that she has been co-opted on the Communication & Public Relations sub-committee of Rugby Africa’s Women’s Advisory Committee.

This, along with the Sports+ Award, will help magnify and enhance her union’s visibility in 2021 and beyond, she believes. “We will experience a major breakthrough as we are now attracting a lot of attention, especially with the Ivory Coast Rugby project, which really highlights women's rugby. And I believe that anything positive that is spoken or written about women's rugby will bring us more visibility and will be beneficial, as we hope to further accelerate our growth.”

“Break Down Barriers, Experience the World of Rugby” kicked off in Abidjan in November, and completed the fifth phase in northern Korhogo on January 16.

Guei is not only committed to continuing the tour in 2021, she also has ambitious plans to advance the cause of women’s rugby in her country with a number of enterprising initiatives.

Her primary source of motivation is love and passion for the sport, she says. “It unites and empowers us all; there is also this shared purpose to build something great at the service of others, especially women.”

Guei’s message to women interested in rugby? “We urge them to break away and dismiss gender stereotypes, come and experience this sport because it is filled with so many amazing values that will allow them to face whatever life brings their way. Women deserve the same rights as men. Define your goals and give yourself the means to achieve them.

“We are waiting for you!”

Africa will also be well represented when South Africa participates in the next rugby World Cup women in New Zealand in 2021 and Kenya in the Olympic Games.