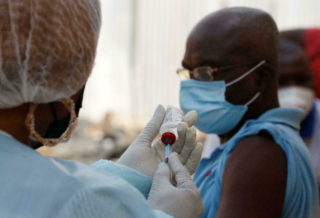 Public health authorities in Ivory Coast recently misdiagnosed a patient with the Ebola virus—a deadly haemorrhagic illness that hadn’t been seen in the country for nearly thirty years. The erroneous announcement sparked widespread panic, leading the World Health Organization to send 12 health experts, 5,000 vaccines and $500,000 to the country as a precautionary measure. Two weeks after the alert was issued, however, scientists examining the samples in Lyon’s Pasteur Institute concluded the test had been a false positive.

While it is undoubtedly good news that there is no Ebola outbreak in the country, after all, the news was embarrassing for the Ivorian Ministry of Health considering their previous declaration that they had no “doubt” about the diagnosis. The avoidable health scare has also done damage to Ivorian citizens’ dwindling confidence in public health bodies. The incident is only the latest strain on public health officials in recent months, as the ongoing pandemic throws the fragility of Ivory Coast’s medical system, as well as public confidence in it, into stark relief.

Despite these obstacles, a two-pronged approach could help Ivory Coast resolve recurrent health care issues in the coming months. On the one hand, new public health initiatives in the West African country are bolstering the country’s health infrastructure, while on the other, politicians are doubling down on efforts to address the nation’s endemic distrust in public health services.

Ivory Coast’s public health sector has long suffered severe underinvestment, a legacy of decades of civil conflict. With 48% of the nation living in rural areas and 39.5% under the poverty line, accessibility issues have encouraged the vast majority of the population to favour traditional medicine. This year, the coronavirus is overwhelming the country’s underequipped health facilities. While Covid cases and death rates have remained relatively low across Africa so far, the aggressive Delta variant has caused 25% of Ivory Coast’s Covid-related deaths in August alone. The WHO has warned that alarming oxygen shortages in the country are largely responsible for the growing number of (mostly avoidable) deaths.

Despite this bleak backdrop, two recent European initiatives are quietly driving major infrastructural advances to Ivory Coast’s medical facilities, both of which will fortify the country’s responses to current and future health crises.

French infrastructure delivery company Ellipse Projects has been making important progress in medical building projects. In 2018, the company signed a major contract to construct and rehabilitate the country’s ICHEs (Initial Contact Health Establishments). Ellipse Projects is expected to build 240 new ICHEs and restored 400 extant structures across the country. After the success of the first initiative, the Ivorian Ministry of Health and Public Hygiene signed further agreements with Ellipse Projects for work on just under 300 more health care centres, in both rural and urban areas. The new facilities will greatly improve the country’s medical access as well as diagnostic capacity in the years to come.

And just last month, the UK foreign credit agency Export Finance (UKEF) agreed to finance six hospitals across the country. UKEF will lend €241 million – of a broader €326 million project – in loans and direct financing to build the new facilities, which will cater to over one million people in the communities of Bouaké, Boundiali, Katiola, Kouto, Minignan and Ouangolodougou. Construction work on the hospitals is already underway and will be completed by 2024.

Internal communication is key to shoring up confidence

With new medical facilities and equipment springing up all over the country, the country’s politicians now have their work cut out to encourage confidence in the care provided by these facilities. This point is particularly crucial in the case of vaccination for Covid-19. Despite being the second country on the African continent to receive COVAX vaccines, less than 5% of Ivory Coast’s population of 26.3 million have received one vaccine dose. Though the US delivered a shipment of 1.2 million vaccines through COVAX last month, Ivory Coast is struggling to find arms to inject them into, a result of persistent vaccine hesitancy.

Misinformation spread by social media has fuelled scepticism towards medical services, with Europe’s temporary suspension of AstraZeneca vaccines and the suggestion by two French doctors to trial existing tuberculosis vaccines on Africans provoking yet more distrust. Daniel Ekra, the epidemiologist in charge of the Ivorian rollout, explained that “there has been a kind of systematic refusal of the vaccine because people thought Africans would be used like guinea pigs.” Meanwhile, conspiracy theories about anti-vaccine politicians being killed are proliferating online.

Undeterred, the country’s lawmakers have initiated a wide-scale communications effort that includes launching social media campaigns, offering football tickets in exchange for inoculation, and meeting with influential religious leaders. In a successful bid to increase vaccine uptake, the government has also instated mobile inoculation centres in major thoroughfares. Following the introduction of Covid-19 health passes for travellers entering the country this month, the government has now floated the idea of barring the unvaccinated from certain activities in the economic capital of Abidjan in a bid to encourage inoculation. As the WHO’s goalpost of 10% vaccination in African countries approaches its deadline of the end of September, Ivory Coast’s inoculation rates will be a good indicator of the impact made by consistent communications.

While it will take more than a public relations blitz to banish vaccine hesitancy and scepticism towards medicine, the large-scale medical infrastructure projects Ivory Coast is carrying out within collaboration with UKEF and Ellipse Projects will concretely improve access to care for all Ivorians, not only during the pandemic but also over the long term.