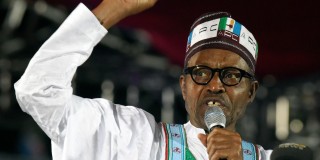 In Nigeria, an anti-corruption war on rewind

A former Nigerian military dictator has just won a historic democratic election and is sworn in amidst tremendous international and domestic goodwill.  He immediately goes to work tackling the nation’s endemic corruption.  The notoriously opaque Nigerian National Petroleum Corporation (NNPC) is a primary target: parasitic middlemen in crude oil sales are squeezed out, senior staff is overhauled, and transparency is improved.

You’d be forgiven for thinking the preceding paragraph was meant to describe Nigeria in 2015.  No, that was 1999, and the former military dictator was Olusegun Obasanjo.  Yet, that paragraph precisely describes current President Muhammadu Buhari’s first year in office.

In Nigeria, history repeats itself—over and over again.  Each successive government appears to repeat lines (or actors) from a predecessor.  [Four successive coup speeches in the 1980s and 1993 actually contained the same sentence, almost word for word.]  One topic, in particular, unfailingly features in every inauguration or coup speech: corruption.  Ever since Nigeria’s first coup plotters declared the first elected leaders “political profiteers” and “swindlers”, every subsequent government has promised to check the corrupt excesses of its predecessors.

President Buhari is no exception to this trend.  But—make no mistake—he is no anti-corruption pioneer.

To the contrary, Buhari has some shoes to fill in the anti-corruption domain.  Just six weeks after Obasanjo was sworn into office in 1999, he submitted a bill to create the Independent Corrupt Practices Commission (ICPC) to prosecute public sector graft. When political controversy and legal loopholes paralyzed the ICPC, Obasanjo created the Economic and Financial Crimes Commission (EFCC), initially intended to tackle banking and advance-fee fraud.  Initial successes emboldened the EFCC, and it ultimately went after, and secured a handful of convictions against, politically powerful Nigerians.

Despite a mixed record, inefficiency, and sometimes, blatant incompetence, the EFCC is the only Nigerian institution that has successfully posed a meaningful challenge to the impunity enjoyed by the nation’s corrupt and powerful political elite. That represents some success, perhaps even a critical turning point in Nigeria’s battle against endemic corruption. That was Obasanjo’s achievement.

But, Obasanjo’s anti-corruption war ultimately fell far short of the initial hype.  Many agree that his anti-graft campaign was highly partisan and lopsided, often used as a political tool against his enemies.

Nigeria’s history counsels for skepticism at any new anti-corruption crusade.  Yet observers are already falling into an amnestic trance of hope, prematurely referring to Buhari’s anti-corruption war as “unprecedented”, or representing a turning point.  In fact, nothing Buhari has done to date is unprecedented.  The EFCC was far more aggressive during Obasanjo’s tenure, and actually secured some convictions.  While Buhari has outlined an anti-corruption plan that demonstrates substantial clarity about the complex problem, no concrete steps have yet been taken to strengthen anti-corruption institutions.

Nigeria’s observers ought to know that the nation’s leaders have never lacked compelling policy papers.  What they often lack is political will. And, like it or not, Buhari is beholden to the same corrupt forces that brought many of his predecessors to power and subsequently prevented them from acting holistically against corruption.  For instance, there remain figures in Buhari’s close circle with credible accusations of corruption. If he fails to move against them, Nigerians may well feel some déjà vu, yet again, at the next election cycle.

Buhari does have something Obasanjo did not have, even at his peak in 1999: a deep aura of personal integrity.  That could go a long way, if properly leveraged.  The ball is in Buhari’s court, but we must hold his feet to the fire.