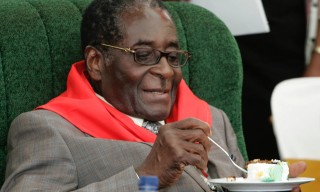 #ZimShutDown2016: Zimbabweans have had enough

Banks and other business operations were shut down in Zimbabwe on Wednesday, in what has been described as the most peaceful mass protest in the last decade, as Zimbabweans spoke out against corruption perpetrated by their government. In solidarity, thousands of Zimbabweans boycotted their places of work in the hope that this stay-away will force the government to provide a solution to the deteriorating economic situation. The protest movement known as #ThisFlag was kick-started by a pastor in Zimbabwe, Evan Mawarire.

Mawarire, a 39-year-old pastor and Master of Ceremonies decided to make a video where he vented his frustrations about the economic hardship he was facing in Zimbabwe. In an interview, he claimed that the film was spurred by his continual struggle to make ends meet. “I’ll be honest with you, the day it happened was a really tough day for me. I was thinking of ways I could get more money for school fees, or I could borrow money, but it just wasn’t happening. I was packing to go home.”

He then made a four-minute unscripted video with the tagline – “‪#‎ThisFlag.” Mawarire further wrote, “If I have crossed the line then I believe it was long overdue. I’m not a politician, I’m not an activist…just a citizen #ThisFlag.” Within hours of releasing this video, Pastor Mawarire had become a hero, voicing out the fears of his countrymen and #ZimShutDown2016 is an extension of #ThisFlag.

Thousands of its supporters are speaking out against the government’s excesses on different social media platforms. The solidarity of Zimbabweans against poor governance and corruption was what led to the country’s shutdown on Wednesday. Mugabe, who has been the country’s president since its independence, has not been able to salvage the failing economy. Zimbabwe has not had it easy in recent years. While battling a drought that placed about 30 million people at risk of hunger, economic growth also slowed dangerously. However, despite the deteriorating economy, government officials continue to live a life of opulence, thereby pushing citizens to the breaking point, where they “express their pain by any means.”

Has the protest yielded any positive result?

In the wake of the protests, the Zimbabwean government has reviewed its earlier decree to ban the importation of basic commodities. Last month, the government issued a Statutory Instrument (SI 64 of 2016) in order to restrict importation and force the citizens to “buy Zimbabwe.” However, the ban caused further economic distress, as traders complain of low patronage and buyers claim that goods have gotten more expensive. With the ongoing protests, the ban has been reviewed and has allowed for periodic importation.

While the commodity ban lift is a welcome development, some think that due to the level of economic decay, the shutdown may not yield any substantial result. John Robertson, an economist, reasons that the stay away may just be like any other work free day. “There isn’t much work being done in the factories anyway, so this will not make much of a difference.”