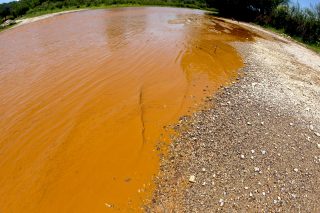 On Friday, October 16, Zambia announced the closure of a copper processing plant owned by Rongxin Investments Limited after massive pollution at Luena stream caused by a collapse of the plant’s waste dam. According to a report, the announcement was recently made by the country’s Environmental Management Agency.

The agency said the waste dam, which is more than 370 km north of Lusaka, had collapsed on Thursday, discharging massive quantities of effluent (liquid waste) into the Luena stream. “A stretch of more than 200 meters along the Luena stream has been polluted, affecting fish and other aquatic organisms,” the environmental body added. Even small farms along its banks were also affected.

The Luena stream is located in Zambia’s Western Province. It rises in the western part of the Kafue National Park, Africa’s second-largest wildlife park with about 55 species of mammals and is a source of water for its wildlife.

More so, the stream flows to the west through the Kaoma District to become a tributary of the Zambezi river. That is, it feeds the Zambezi River. Suffice it to say, therefore, that the livelihoods of thousands of Zambian’s who depend on the rivers are at stake. The fisheries sub-sector supports around 1,000,000 people in Zambia, with more than 72,000 people working as fishers.

The Zambezi River, located above the Victoria Fall, is also home to the renowned Tiger Fish and over 75 other species of fishes. Most tourists to the landlocked East African country safari their way through rugged paths to participate in sport fishing or simply enjoy the view of fish-fighting.

However, the river’s aquatic life is under a major threat given the copper pollution from the Luena stream. This could have ripple effects on the tourism sector, which may likely experience slight setbacks in sport fishing if solutions are not speedily proffered to clean the river. Unless thoroughly cleansed, the water remains poisonous for both human and animal consumption.

Although the copper company, Rongxin Investments Limited, has been ordered to suspend operations and clean up the stretch of water before submitting an application to re-start operations, it is not known how long the processes would take.

According to the United States’ Environmental Protection Agency (EPA), copper is listed as a micronutrient and a toxin. Toxicity in mammals comprises of a wide variety of animals (including humans). Health conditions like liver cirrhosis, necrosis in kidneys and the brain, gastrointestinal distress, lesions, low blood pressure, and fetal mortality are associated with copper pollution.