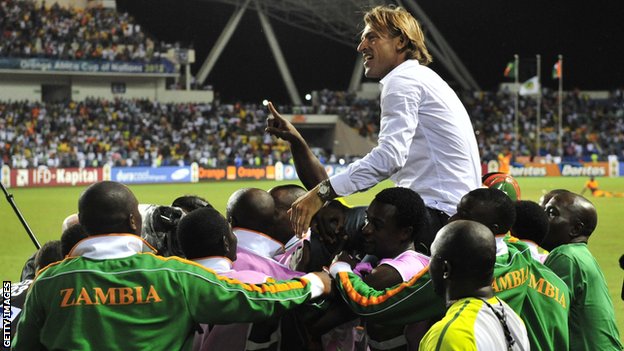 Zambia’s Coach Is Staying On

Earlier this week, various media reports suggested Renard- who guided the Chipolopolo to win this year’s African Cup of Nations (AFCON)- was set to be named South Africa’s new boss.

But speaking to Kickoff.com Bwalya said: “Don’t believe what the journalists are saying; these reports are laughable and untrue.”

“Believe me, Renard is happy here and has a contract until 2014. People must not believe everything that is reported.”

Zambia, this weekend, will host the Black Stars of Ghana in a World Cup qualifier after last week’s disappointing result against Sudan.

Renard’s team lost by 2 : 0 while their opponents this weekend thrashed Lesotho by 7 : 0. However, the last time Zambia played Ghana, the Chipolopolo beat the Black Stars 1 : 0 in the semi finals of the 2012 AFCON