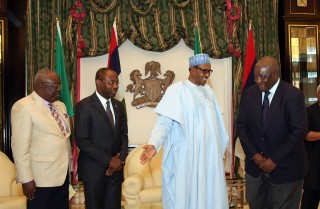 Yesterday, President Muhammadu Buhari of Nigeria, received a national honour in Malabo, one which is considered the highest in the Republic of Equatorial Guinea. He was presented with this honour by the President of Equatorial Guinea for his “Personal integrity and exemplary leadership style and courage to fight terrorism in order to ensure peace and safety in Africa.”

The Nigerian leader flew to Guinea on the 14th of March for a two-day visit to hold meetings with President Teodoro Obiang Nguema Mbasogo to discuss maritime security in order to protect territories in the Niger Delta and the Gulf of Guinea.

At the investiture, President Buhari said the recognition was for the people of Nigeria who had worked tirelessly to sustain peace in the country and across other neighbouring countries in Africa, while stating that African countries needed to come together to tackle common challenges.

“On behalf of my country, Nigeria, and the people, I will like to express profound gratitude for the honour given to me and my people. The reality of the situation now is that there had never been a time in history for greater neighbourliness, for security and economic stability than now,” he said.

President of Guinea, Mbasogo, also pledged support to Nigeria in his fight against Boko Haram while acknowledging that it was an honour for his country to confer the award on him.

“We are here to recognise the son of the soil. On this occasion, we deem it fit and appropriate to decorate the son of Africa for the great work he is doing in Africa, which includes tackling a great menace to the continent, Boko Haram,” he said.

It should be noted that this same award was given to former President Goodluck Jonathan sometime last year during a 2-day visit to Guinea.