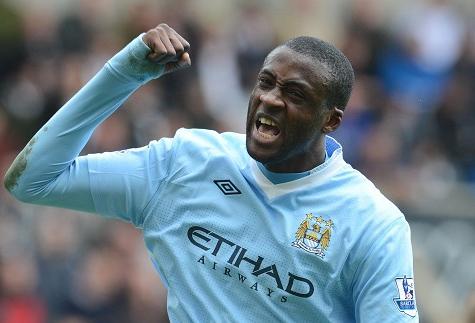 This is a roll call of the world’s 10 richest footballers. Lionel Messi, David Beckham,  ChristianO Ronaldo, Wayne Rooney, Sergio Aguero, Fernando Torres, Ricardo Kaka,  and Philipp Lahm. These are some of the greatest names to grace the round-leather game, the world’s unarguably most popular sport. Ten of them.

But right in fourth position, just behind CR7, and in seventh place, just narrowly bettered Aguero, Diego Maradona’s son-in-law, are the legendary, charistmatic, ever-boisterous Samuel Eto’o Fils, and the towering yet powerful Ivorian midfield maestro, Gnegneri yaya Toure. In a world and in a sport so fiercely competitive, Eto’o and Toure continue to lift Africa’s flags to the highest heavens.

There could never have been a complete list of richest footballers without the name of Cameroonian Samuel Eto’o. Yes; if Africa’s most decorated footballer is not one of the world’s richest players of the game, who else should? Currently boasting an estimated net worth of $50 million, his 2011 earnings were put at €13 million, and his 2012 earnings €23.3 million (about £19.4 million).

In the last 12 months, he has added Puma and Ford to his ever-growing roll of sponsors, after joining rich Russian club, Anzi Makhachkala in a three-year deal worth an annual salary of €20.5 million. In terms of club salary, the deal makes Eto’o the world’s richest footballer, eclipsing Ronaldo’s €13 million at Real Madrid and Messi’s €10.5 million at Barcelona.

He is the record holder in number of appearances by an African player in La Liga. And in 2010, he became the first and only footballer ever to win consecutive two European Continental Trebles, following his back-to-back victories with Barcelona and Internazionale. He is also the second player only to have scored in two separate UEFA Champions League finals.

In 2006, he won the Pichichi trophy, given to the top goal scorer in La Liga. The same year, he was nominated second runner-up in the FIFA World Footballer of the Year award, becoming only the second African footballer (after Liberia’s George Weah) to have made it to the top three.

At 17 years and three months, Eto’o was the youngest player at the 1998 FIFA World Cup in France. He is the all-time leading scorer at the African Cup of Nations (AFCON) with 16 goals, and was the top scorer for two consecutive editions in 2006 and 2008.

Fresh from shattering Manchester City’s confinement to the shadows of city rivals Manchester United by clinching the 2011-2012 Premier League crown, current African Footballer of the Year, Yaya Toure, is justifying his billing as the continent’s best. The Sunday Times UK Rich List puts his net worth, as at May 2012, at £12 million, after his 2011 and 2012 earnings were put as €13.8 million and €17.6 million (about £14.7 million).

Toure secured a staggering £55.6 million (€67.3 million) move from Spanish Barcelona FC to cash-rich English giants Manchester City in a five-year contract with a transfer fee of £24 million (€29 million) in 2010, immediately settling into his critical midfield role and proving afterwards to be a most valuable addition to a City that underperformed despite huge monetary investments from its owners, by scoring vital goals, making pin-point goal assists to the club’s strikers, and scuppering oppositions many goal-bound moves.