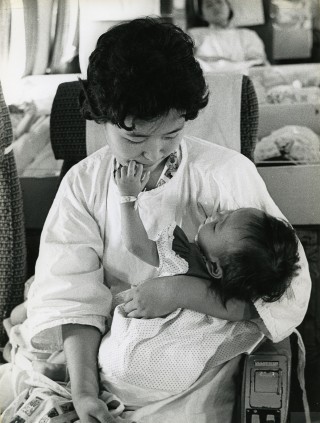 Women are now paid to have babies in South-Korea

Can you imagine a world where you are paid to birth a baby? I know what you are thinking, and no, this isn’t a movie plot, but it might just be one of the greatest reality plot twists of our generation, and in this episode, the location is South Korea, and benefactors? Well, Sherlock, South Koreans! To try and curtail the low birth rate in the southern country, they have devised a means to pay people to give birth, and even raise the child. If this is not the real definition of best of both worlds, I don’t know what is, except, it’s too expensive, and it might really not curtail the crisis.

Kang Mi-ok, just like us, thinks this deal is simply too good to be true. She says “It’s completely a bonanza.” This is after receiving 2 million won (US$1,700) to promote the birth of a fourth baby, from Cheongyang County, a rural county in central South Korea in August. Her bonanza isn’t over yet as she is also set to receive an extra 8 million won in installments by 2020 from Cheongyang County, South Chungcheong Province, to help her raise the baby.

South Korea has one of the world’s lowest child birth rates, contributing to the aging crisis in Asia. This is because reports already state that the country could become the world’s oldest country by 2045, with an average age of 50. There are factors that have contributed to this phenomenon, and as simple as these factors might sound, they might be the cause of South Korea’s extinction in 2750.

In South Korea, the average number of babies a woman gives birth to in her lifetime is 1.24, as opposed to the replacement level of 2.1 that would be needed to keep the Asian country’s population of 51 million stable. The reason for this decrease is not necessarily because a large portion of the population does not want to birth kids. Who wouldn’t want kids? A minority might give a negative answer, but certainly not the majority. But why is the majority in North Korea different?

The statistics of childbirth tell the obvious story of the statistics of marriages. No child, no marriage. This is not to say that all children come from a married home, but we can’t deny that marriages are at least a strong and determining factor for childbearing. In South Korea, the number of marriages between January and May 2016 was 9,000 marriages low from last year at the same period. The simple reason is not the distaste of marriage completely, but the distaste of a young unemployed people’s bank account (towards marriage) and their inability to simply afford marriage. The youth unemployment rate of the eastern Asian country rose from 8.20 percent in November to 8.40 percent in December of 2016. This isn’t the only information that elicits the growing pains of the birth crisis. In a recent poll, out of 1,000 singles, 22.5 percent of single women said they would not have any babies after marriage, this was according to the Seoul-based matchmaking company Duo. And more than a quarter of those surveyed said the difficulty in balancing between work and family is the main reason behind the low birth-rate. This may also be the reason why more that 22 percent of women do not want to have kids after marriage.

An addition to the childbirth menace in South Korea is the long working hours of the country. South Korea has one of the world’s longest working hours, and most women have become more career-oriented. The high number of working hours and the unfriendly attitude towards women who re-join the workforce after the end of their maternity makes it even more difficult to choose childbearing over a career. President Hwang Kyo-ahn of South Korea saw the need for a drastic overhaul of the birth crisis and called on officials to address the issues that make people unwilling to get married or have babies.

In South Korea, the problem of childbirth is taken seriously and ran in the most expensive manner possible. But if you are spending money to coerce people into giving birth, how much left would be made to create jobs? Or create policies that will cut the working hours to enable people have time for themselves and their families.

Couples in South Korea can, however, be grateful for the bonanzas which don’t only include money but financial support for fertility treatment regardless of their income level from September. This support is limited to lower-income couples, which means that everyone will be eligible for at least 1 million won ($900; £680) per session, with the lowest earners receiving 2.4 million won. But however, it maybe they might also want to try out methods that are not capital intensive like making their country more immigration friendly, to push more immigrants in, drive up the population and simply hope that those immigrants will give birth, and intermarry. This might lead to over population in the long run, but before it gets to that point, a measure would have been set in place, which wouldn’t be as stringent as the Chinese 1 child policy, which gave birth to an aging crisis.