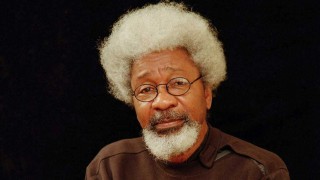 Apparently, quite a number of people didn’t envisage a Trump victory in the United States presidential election on Tuesday, November 8, 2016, one of such people is Africa’s first Nobel laureate, Wole Soyinka. In the build up to Tuesday’s election Soyinka said he would rip his green card and relocate home to Nigeria should Trump win.

“If in the unlikely event he does win, the first thing he’ll do is to say all green-card holders must reapply to come back into the US. Well, I’m not waiting for that,” he said during a seminar with students at Oxford University.

Since the announcement of Trumps surprising win on Tuesday, Nigerians have teased the activist and playwright on his prior statement with many doubting that he would actually follow through. But Soyinka is proving to be a man of his word – he’s coming home.

In a reported interview conducted by a Nigerian magazine, the author restated his promise to leave the United States on the 20th of January 2017 when Trump is sworn in as the 45th president of the United States. “Come January 20, 2017; watch my WOLEXIT!”

Soyinka was a strong critique of Trump during the electoral campaign, as he was against most of his remarks about Muslims, Africans, Mexicans, and migrants in general. Regarding Trumps’ proposed great wall to ward off Mexicans, Soyinka said that the president-elect had long erected mental walls across America, and the globe.

“Trump’s wall is already under construction. Walls are built in the mind,” he stated.

The scholar has also expressed a pervasive fear among Africans that Trump, unlike past US presidents, does not have Africa on his radar. Soyinka had told Newsweek the day after the election that Trump is less likely to maintain the alliance that the US has formed with Nigeria in fighting the insurgency.

“One should expect that level of collaboration to diminish,” he said. “Trump’s mentality is one of, ‘What are we doing there? What business do we have over there?”

Fellow Nobel Prize winner Ellen Johnson-Sirleaf, president of Liberia, has also recently voiced a similar fear. In an interview with the BBC, Sirleaf said she is worried about existing agreements between the US, Liberia, and other countries in Africa.

Like Soyinka and Sirleaf, the entire world, not just Africa, is quite anxious about a Trump presidency.