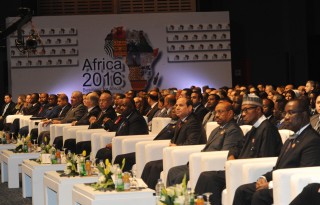 With the launch of the AU passport, Africa is now borderless

During the 27th African Union (AU) summit in Kigali, Rwanda, the AU passport was launched. The idea of a visa-free passport for members of the AU was first established in 2013, as a part of the 2063 agenda, which incorporates 7 major goals to help promote a self-reliant continent. One of the primary goals of the agenda is to guarantee integration and political unity in Africa and this passport will aid the body achieve that goal.

The release of the AU passport is a significant mile stone for the outgoing AU Chairperson, Dr. Nkosazana Dlamini Zuma. In her last opening speech on Sunday, she noted that with the launch of the passport, the body has been able to cross off two big items on its to-do list. At the summit, Dlamini Zuma presented the new passport to the incoming chairperson, H.E. Idriss Deby Itno, the President of Chad, and Paul Kagame, the Rwandan President.

While the passport has been acknowledged by heads of AU member states, it is not without its disadvantages. Some African countries are currently in a fierce battle with terrorism, therefore, without strict immigration rules in place, this may be aiding the fluid migration of terrorists across the continent, potentially stalling intended growth.

In an interview conducted with Ventures Africa, Acha Leke highlighted other reasons why a borderless Africa may be discouraging. He noted that African leaders may be worried that non-nationals may take up all the jobs. Also, embassies generate an important amount of revenue from visa applications which may dwindle with the popularity of AU passports. However, Leke opines that these concerns, although valid, do not outweigh the positives of this advancement.

Although, the passport is currently exclusive to government heads and diplomats, it is here to stay, even though it will take a while before it circulates among non-dignitaries. Nkosazana Dlamini Zuma says that the body has agreed “to create the conditions for member states to issue the passport to their citizens, within their national policies, as and when they are ready.”