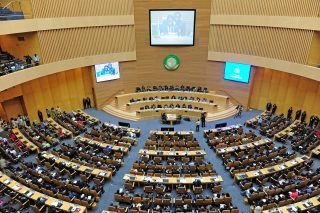 With the AU presidency months away, Macky Sall’s Senegal emerges at the center of African diplomacy

Senegal’s growing reputation as an African diplomatic heavyweight is set to be further accentuated after the country’s president, Macky Sall takes up the prestigious mantle of leadership of the African Union starting in February 2022. Between a recent visit from US Secretary of State Antony Blinken, the next edition of the Forum on China-Africa Cooperation (FOCAC), and the upcoming Dakar Forum on Peace and Security, however, Sall and his government are not waiting for February to step up to the stage.

With Africa in the grips of not only the ongoing Covid-19 pandemic but also a surge of political instability and serious security challenges, Senegal’s rise to regional and continental leadership is coming at a pivotal time for Africa as a whole – and its seaside capital of Dakar is emerging as a privileged venue for discussing those issues with the continent’s international counterparts.

Distinguished visitors from Washington and Beijing

U.S. Secretary of State Antony Blinken arrived in Dakar on November 20th, making the Senegalese capital the final stop of his five-day tour of Africa. During a brief but busy stay, America’s top diplomat met with Macky Sall as well as with Aïssata Tall Sall, the Senegalese Minister of Foreign Affairs, to discuss topics as diverse as renewable energy, infrastructure development, and Covid-19 vaccines.

Blinken also visited the country’s Pasteur Institute, which has been at the forefront of the fight against Covid-19. In July, the institute received important backing from both the U.S. and several European entities to build a large-scale vaccine manufacturing facility that would kickstart local production of Covid vaccines in Africa.

Senegal, as one of America’s most important allies in Africa and a showcase for the advantages of the democratic process thanks to its history of peaceful transitions of power, offered a logical venue for the closing chapter of Blinken’s trip to the continent. Although his predecessor Mike Pompeo also visited Senegal in 2020, many observers saw Blinken’s visit as a way for American diplomacy to “make up for lost time” after a Trump presidency largely uninterested in building bridges and competing with increased Chinese influence across Africa.

Close on the heels of Blinken’s visit, the Chinese themselves will travel to Dakar, with the eighth edition of the Forum on China-Africa Cooperation (FOCAC) scheduled for November 29th and 30th in the Senegalese capital. In the three years since the last FOCAC in Beijing, crises such as Covid-19 have helped expose significant issues surrounding China’s approach to the continent – such as the unsustainable debts of African governments towards their Chinese counterparts, the need to balance a lopsided economic relationship, and China’s responsibility to help address global vaccine inequality. Each of those issues will feature prominently on this edition’s agenda.

Peace and security in Dakar

A few days after the FOCAC, Macky Sall will host perhaps the most important event on Senegal’s diplomatic calendar: the Dakar International Forum on Peace and Security, which will be held on December 6th and 7th. The Dakar Forum will welcome numerous African heads of state, including South African president Cyril Ramaphosa, Guinea-Bissau’s president Umaro Sissoco Embaló, Nigerien president Mohamed Bazoum, and African Union Commission chair Moussa Faki Mahamat. It will also be host to several top officials from Africa’s international partners, including President of the European Council Charles Michel and the foreign ministers of France, Portugal, and Spain, as well as high-level representatives from Finland, Norway, Slovenia, and Japan. The Dakar Forum will make use of a far-reaching and holistic program of security topics, taking into consideration the crises brought about by climate change and the pandemic as critical factors in the proliferation of violence across the continent.

This edition of the summit is likely to carry more weight than usual, given recent developments in African politics. After years of improved stability across the region, several African nations have experienced military coups of late, with Mali, Sudan and Guinea all going through abrupt regime changes in the last six months. Meanwhile, ethnic conflicts have re-ignited in the Tigray state of Ethiopia and the Kiwu region of the Democratic Republic of the Congo, while groups like Boko Haram and the remnants of ISIS continue to pose a threat across North Africa, the Sahel, and Mozambique.

Taking place every year since 2014, the Forum is organized under the high patronage of Macky Sall, who has used it not only to bring the continent together on several key issues but also to elevate Senegal’s standing in African diplomacy as part of his government’s Plan for an Emerging Senegal (PES). President Sall will likely use this year’s edition of the Forum to emphasize the same themes he put forward at this past May’s Paris summit on financing African economies, where he called for a “New Deal” for Africa based on foreign investment and a rebalancing of the relationship between African nations and the West.

With the continent facing dovetailing crises over Covid, economic disruption, climate change, and political breakdowns, Senegal is being asked to helm the African Union for a year that will likely be pivotal for Africa’s struggle to return to the path of democracy and development. Events like this year’s Dakar Forum come at a critical time, and the discussions that take place at these conferences will set the tone for Macky Sall’s AU presidency.