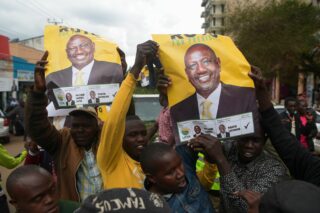 William Ruto: Kenya’s next president has a heavy job cut out for him

On the 9th of August, 2022, Kenyans grabbed global attention as they trooped out in the morning cold to their various polling units. After almost a decade under two-term president Uhuru Kenyatta, it was time to choose its next captain. It was a close rivalry between two candidates: William Ruto, the country’s vice president, who campaigned as the champion of Kenya’s “hustlers” — struggling young people; and Raila Odinga, a former political detainee who later became prime minister and is making his fifth run for the presidency. Odinga promises economic recovery and a fight against corruption, while Ruto’s manifesto centres on a “bottom-up” economic model.

Odinga, 77, is making his fifth shot at the top job with the support of his long-time foe, the outgoing president, Uhuru Kenyatta, who has already served two terms and cannot run again. The pact between Odinga and Kenyatta left Ruto, 55, out in the cold.

As of report time, William Ruto was declared the winner of the elections, and predictably, many disagree with the result. However, while one camp celebrates and the other debates the election results, one thing is certain: Kenya’s next president is resuming a cumbersome job.

So much work, so little time

A survey by Afrobarometer says nine out of ten Kenyans believe the economy is not doing well. The next president of Kenya has four years to fix the economy. But that may not be enough time, as there is a multitude of problems to solve.

Kenya is East Africa’s largest economy and is a commercial hub for East and Central Africa, hosting regional headquarters of global firms like Alphabet and Visa. Its stocks, bonds and the Kenyan shilling are some of the most traded by foreign investors in Africa.

But now, the IMF ranks the tea-rich nation as the second-worst investment destination in the world. And even though the government has dismissed this ranking as untrue, it will take more than that to convince reactive investors.

Also, foreign investors control up to 60 per cent of activity on the Nairobi stock exchange. That means less interest in the bourse among the locals. At the same time, of the 63 firms listed on the NSE, only five firms take most of the attention. Attempts to attract new listings through issuer engagements, the introduction of new investment products and easing listing requirements have failed to attract new companies to the exchange. The Central Bank of Kenya, in its 2019 annual supervision report, warned that leaving NSE in the hands of foreign investors and only five large firms will expose the stock market to the risk of crashing in the event of domestic or foreign shocks.

William Ruto will be facing the tough job of closing this large trust deficit in the local bourse to increase investments.

Kenya is on track to spend a record amount of money on servicing its liabilities this year. Budget documents presented in April show that the East African nation’s debt-servicing costs climbed to 1.39 trillion shillings ($12.1 billion) in the current fiscal year. That’s 21 per cent more than the estimated cost in the previous fiscal year. Kenya’s debt topped 8 trillion shillings at the end of last year, compared with 1.8 trillion shillings in 2012-13. The economic fallout of the pandemic hit its revenues and forced the National Treasury to seek loans, including $739 million from the International Monetary Fund in May 2020, to boost its response. Debt-servicing costs represent almost 60 per cent of the projected state revenue in the next fiscal year.

The U.S. Federal Reserve and other major central banks have hiked interest rates to tame inflation. Consequently, since much of Kenya’s debt is in foreign currency, the country’s borrowing costs are also rising. Spreads of Kenya’s hard-currency debt over safe-haven U.S. Treasuries – the premium demanded by investors – have come down from over 1,400 basis points in mid-July but are still in the danger zone of above 1,000 basis points.

Kenya ranks 128 out of 180 countries on Transparency International’s 2021 corruption perception index. Most countries that scored worse are either politically unstable or in conflict. According to its anti-graft chief, corruption costs the Kenyan government a third of its budget annually, about 800 billion shillings ($6.8 billion). Solving this problem will not be easy as corruption scandals have been eating into its economy for a long time. For instance, Kenya was famous for the Goldenberg heist, where the government subsidised exports of gold far beyond standard arrangements by paying a company called Goldenberg International 35 per cent more in Kenyan shillings than their foreign currency earnings. In 2014, Kenya was in another scandal when it raised Africa’s largest Eurobond issuance but lost most of it to misappropriation. According to President Uhuru Kenyatta, the government coffers loses an estimated $20 million daily to corruption.

Corruption is also impairing the business ecosystem. According to Borgen Project, one-in-six companies in Kenya pay bribes to get operating licenses, and one-in-three companies bribe to obtain a construction permit.

The shopping baskets of most Kenyans have become significantly smaller since the start of the COVID-19 pandemic. Between June 2020 and June 2021, Kenyan consumers paid 8 per cent more for food and beverages, 14 per cent more for transport, and 4 per cent more for water, electricity and housing, according to data from the Kenya National Bureau of Statistics (KNBS). Inflation hit a 23-month high (6.91 per cent) in September 2021 and reached a five-year high of 7.9 per cent in June 2022.

Although supply chain disruptions and rising oil prices have caused global inflation, it’s not the sole cause for Kenya. The cost of living in Kenya has been surging for at least a decade. Many essential commodities, such as maize, sugar, cooking gas, and petrol, have seen price surges of nearly 50 per cent since 2013, according to KNBS data. However, market surveys say it’s a lot worse: maize and wheat flour have risen by 67 per cent in the last three months.

These are just a few of the many concerns the next president will be dealing with. For instance, healthcare needs urgent attention, as there are only 13 doctors, nurses, and midwives for every 10,000 people. Ruto will also have to work on saving the country’s declining currency.

Nevertheless, the job of transforming Kenya’s economy is cumbersome but far from impossible. However, it’s necessary that William Ruto, the next president, hits the ground running to get desired results.