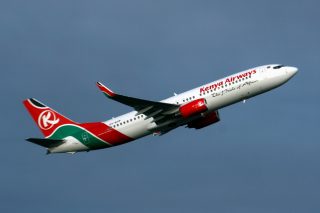 The Pride of Africa, Kenya Airways, is up for sale.

Recently, the Kenya Stock Exchange (KSE) suspended the shares of ailing Kenya Airways (KQ) for another 12 months. That has been the case since 2020 when the COVID-19 pandemic crippled the global tourism sector and worsened its debt problems. According to KSE, the extended suspension aims to enable the company to complete its operational and corporate restructuring process. For several years, KQ has consistently gulped state resources. Now, the country is determined to sell off its entire shares to investors.

Three months after becoming president, President William Ruto made strategic moves to sell the government’s controlling 48.9 per cent stake in Kenya Airways to private investors. He made this move during the US-Africa Summit held last December in Washington. Ruto reportedly pitched a plan to Delta Air Lines to save the national carrier as his administration seeks to divest entirely from the struggling airline. “I’m willing to sell the whole of Kenya Airways Plc. I’m not in the business of running an airline that just has a Kenyan flag. That’s not my business,” Ruto told the press at the summit.

Before the COVID-19 pandemic, the KQ relied heavily on National Treasury bailouts. Last December, The exchequer told the International Monetary Fund (IMF) that it would inject additional state support of KES34.9 billion ($283.2 million) to help the debt-drowning national carrier to meet overdue payments of KES24 billion ($194 million)- including lessors, operations, and maintenance. CH-aviation reported the airline’s debt to have totalled $835 million, including all debts, loans, letters of credit facilities, and convertible equity amounts. Contrary to former plans to nationalise KQ, Kenya is considering appropriate mechanisms to protect the national treasury’s financial interests during the restructuring process.

Airline privatisation is not new in Africa. Not new to Kenya.

In recent years we have seen several African governments move to privatise their national carriers. Togo, Malawi, Chad, Mozambique, and DR Congo have partnered with Ethiopian Airlines to denationalise their national airlines. Most recently, Nigeria took bold steps to select the Addis Ababa-based airline as its preferred bidder for the privatisation of Nigeria Air. That would be its second attempt after it ended an 8-year partnership with Virgin Airlines, owned by British billionaire Richard Branson, in 2012. The businessman took a bow out of the Nigerian market decrying high levels of corruption among government officials. But given Kenya’s previous success in privatising KQ, the country is optimistic that the proposed move would revive the ailing business.

A background of Kenya Airways

In 1977, Kenya Airways was established as Kenya’s national airline. However, over the following 15 years, the company faced significant financial losses and accumulated debt due to defaults.

In 1992, the national carrier was among the 45 companies selected for privatization by the government. This led to the appointment of a new board of directors and the recruitment of a high-calibre management team. Despite the government’s desire for KQ to remain a national airline, majority ownership was transferred to the private sector, while the government retained a portion of the shares. This allowed the airline to continue improving its operating performance and profitability with support from the private sector, resulting in the process of restructuring and commercialization.

Then, in 1995, the International Financial Corporation (IFC), a member of the World Bank Group, advised Kenya to privatise its national carrier. According to the IFC, “after selling 26 per cent of the airline to a strategic partner (KLM), the frequency of the airline’s flights grew by 61 per cent in six years, developing Nairobi into a regional hub. The sale was completed in December 1995 and the public offering was in April 1996.