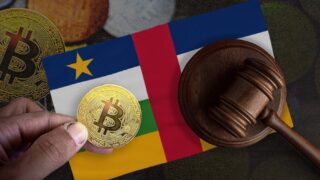 In April, the Central African Republic(CAR) became the first African country and the second in the world after El Salvador to accept bitcoin as a legal tender alongside the CFA Franc. The CAR parliament unanimously passed a law favouring the adoption of bitcoin, driven by the need to solve currency and exchange rate challenges.

It was a controversial move, as what followed was mixed reactions. On the one hand, there is plenty of optimism. CAR President Faustin-Archange Touadera’s office, via a statement, referred to the adoption of bitcoin as “a decisive step towards opening up new opportunities” for the African country. Yann Daworo, a Bangui-based economist, also expressed optimism to the BBC, saying, “businessmen will no longer have to walk around with suitcases of CFA francs that will have to be converted into dollars or any other currency to make purchases abroad.”

On the other hand, it got backlash from the region’s central bank, the Bank of Central African States (BEAC), which manages the Central African CFA Franc common currency used by six countries: Cameroon, Central African Republic, Chad, Republic of Congo, Gabon and Equatorial Guinea.

In response to the move, BEAC issued a statement declaring the CAR’s adoption of the new cryptocurrency law “null and void” and in violation of the tenets of the regional bloc.

“This law suggests CAR aims at establishing a currency competing with or aiming at replacing the Central Africa Central Bank and the Franc CFA,” the statement said.

The IMF also raised concerns about the CAR’s decision, protesting that the country moved without consulting the regional economic union, the Central African Economic and Monetary Community (CEMAC). According to them, the adoption “raises major legal, transparency, and economic policy challenges.”

On top of that, this move seems to have some political undertone. CAR is among six central African nations (including Cameroon, Chad, the Republic of Congo, Gabon, and Equatorial Guinea) that use the Central African CFA franc unit of exchange, a regional currency backed by France. However, adopting bitcoin might be a move by the mineral-rich country to undermine the CFA Franc as it aligns with Russia instead of France, its colonial power. This alignment has been happening since 2016 when President Faustin-Archange Touadera came into office.

But before taking any sides, we need to take a step back from all the noise to evaluate the CAR’s decision. We can start with a simple rule of thumb: if it has a direct positive impact on the average citizen, then it’s good. If it doesn’t impact them, then it’s pointless.

There’s no arguing that African countries need cryptocurrencies. The need to protect their earnings from devaluation and improve cross-border payments make solid cases for these digital assets. Besides, Africa is a low-trust system. And in CAR, where most of its territory is under the control of various rebel groups, decentralised money might be a safer bet for civilians. More so, Africa’s monetary system is evolving towards digital money. So, in theory, it’s a potential win for the country.

But whether it works practically is a different question. Before breaking that down, we need to be clear on how legal tenders work.

What makes a legal tender?

A legal tender is anything recognised by law as usable for making payments, settling a public or private debt or meeting any other financial obligation. That means, technically, you can’t reject that money. So when bitcoin becomes legal tender, citizens can pay taxes in that ‘currency’. It also means civil servants can receive their salaries in bitcoin.

It’s hard to overlook the conspicuous barriers to bitcoin gaining acceptance among everyday citizens. One of the problems is its seemingly ambivalent nature. On the one hand, it serves as digital money that works on a permissionless network. On the other hand, it’s a risk-on asset whose value is measured in US dollars. Attaching a price to ‘money’ makes it look more like a tech stock or property and less like a currency. So if I can pay taxes using a digital asset like bitcoin, I should be able to do the same with land or a Microsoft stock. So when we hear of companies like Microstrategy using bitcoin as collateral, that strengthens the case that it’s more of a property than money. Nobody uses money as collateral to take a loan. More so, pricing a ‘currency’ in dollars means people now need to be able to afford it.

The idea of having ‘deflationary’ money sounds promising for a country like the Central African Republic. But in practical terms, it’s just a pipedream for the mineral-rich country. CAR’s internet penetration stood at just 14 per cent in 2020, which translates to just 655,500 people, yet you need the internet to use bitcoin. The average price of 1GB of data is $9, too high for most citizens considering its GDP per capita is $480. According to the Economist Intelligence Unit, only around 14 per cent of people have access to electricity, with less than half having a mobile phone connection.

Again, CAR is not the first state to adopt bitcoin as legal tender. El Salvador, who did it first, has not had smooth sailing with that decision. As of 2020, about 55 per cent of its population had access to the internet, much higher than in CAR. And when El Salvador adopted bitcoin as a legal tender in June last year, it already had a small but growing community of business and individual crypto users.

Yet, bitcoin uptake has been slow. Part of El Salvador’s president Nayib Bukele’s plan to use bitcoin to “bank the unbanked” in the country was to roll out Chivo, a mobile wallet app for citizens to own and transact bitcoin. However, a study shows that usage of bitcoin for everyday transactions is low in El Salvador and concentrated among the banked, young and educated. It also shows that the Chivo wallet had “virtually no downloads in 2022” and that the median app user only stores and transfers US dollars on the wallet, not bitcoin.

Also, El Salvador has been stocking up its reserves with bitcoin since it became legal tender. Nayib Bukele has been betting that bullish bitcoin investments could rescue El Salvador’s economy from its growing debt-to-GDP ratio. The country doesn’t publish data on its bitcoin holdings, but it announces purchases. According to Bloomberg data, Bukele’s administration has spent $103 million on 2,301 bitcoins since September. The cryptocurrency has fallen 45 per cent since the first purchase, cutting down the value of the nation’s bitcoins to about $66 million.

It’s unlikely that CAR would take the same route, primarily because it’s one of the poorest nations in Africa. El Salvador is taking on a risky experiment that CAR cannot afford. Besides, crypto still has to evolve into a much more simplified form before it can ‘bank the unbanked.’ Telecom companies like MTN and fintech companies like M-Pesa are doing that more effectively.

On the bright side, countries adopting bitcoin as legal tender make them public specimens for the world to observe. That’s positive for the world’s evolution to digital currencies. Countries like China and Nigeria are experimenting CBDCs, while CAR and El Salvador are testing cryptos. So everyone will be able to tell what the future of money should be without guessing.