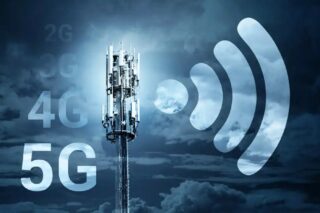 Will 5G work in Nigeria?

Last month, there was a lot of celebration (especially within the tech community) around the arrival of 5G in Nigeria, courtesy of MTN. The announcement implied that Nigeria is now on track to launch the 5G network commercially, joining other African countries such as Lesotho and South Africa. But is Nigeria ready for 5G? Before I answer that question, let me tell you a quick story.

Satellites and a dream of space

In August 2005, the historic Hurricane Katrina belted into America, destroying large parts of New Orleans. The people in charge of disaster response needed satellite images right away to see what they were up against. But the first images to come in were not from the myriad s launched by NASA or the space agencies of other wealthy countries. It was a small Nigerian spacecraft, launched from Russia two years earlier, that beamed them to Earth. The same satellite had previously provided valuable images for aid workers following the Asian Tsunami—the world’s third-largest earthquake.

That small Nigerian cube stirred up so much talk that British politicians and a taxpayers’ pressure group called for a halt in development aid, saying Nigeria did not need help if it could afford a space programme. Even though its space budget was relatively small, it looked like Nigeria was on track to compete globally in space exploration. But over two decades after launching its first satellite, Nigeria’s space ambitions are still a pipe dream.

I know, I know. How does this satellite story have anything to do with 5G? Well, it’s simple: it takes more than an initial launch for a market or country to be ready for a new phase of technology. Nigeria had what it took to start a space exploration journey, but growth has been slow. Now, we’re launching 5G, the newest generation of the internet. But does Nigeria have what it takes to make it grow?

5G (5th Generation) is the most recent generation of mobile communications technology and is designed to outperform previous 4G networks.

The whole buzz about it is not undue. Over the last 30 years, so much economic transformation has happened as the mobile industry developed 2G, 3G, and 4G technology. And 5G ought to build on these previous generations’ success to create new use cases and possibilities on the internet, thereby aiding new business models. And no, that statement is not another barrage of empty buzzwords—it’s true.

Before 4G, early mobile technologies (1G, 2G, and 3G) were heavily voice-oriented in their network configuration. 4G came out of the need to move from voice to data services. I hope the image below makes it simpler. 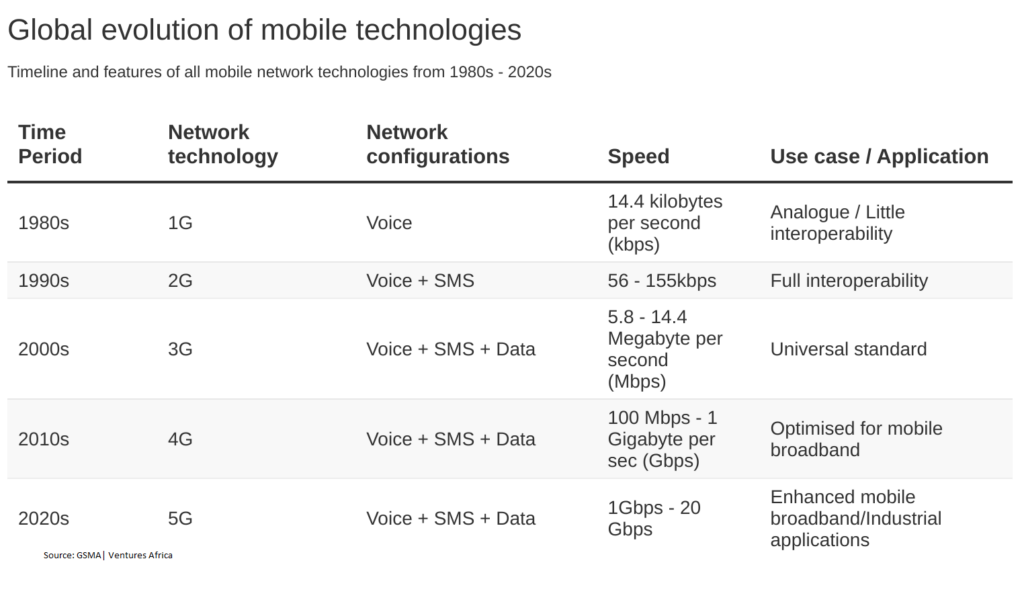 You’ll see that the idea of 5G is to perform every function 4G does on a much larger scale and have the potential for more features.

5G offers four principal use cases that set it apart from previous generations. First, 5G is 100 times faster than 4G, with peak download speeds of at least 20 Gb/s and a consistent user experience data rate of 100 Mb/s in dense urban areas. That means if I wanted to download a 6GB movie, it would take approximately 49 seconds to download on the 5G network versus 50 minutes on average via 4G.

Furthermore, 5G has low latency (a delay in processing data over a network). Compared to 3G (100 milliseconds) and 4G (200 milliseconds), 5G response times are as low as one millisecond (30 milliseconds). This feature enables services such as virtual reality (VR), continuous live streaming, and so on.

The third application revolves around massive machine-to-machine communication. This use case includes the ability to support at least one million IoT connections per square km while maintaining long battery life and broad coverage. For example, a manufacturing plant could have thousands of machines linked together, with one machine telling the other what parts or procedures are needed to complete an order. All of this is happening in real-time and on a large scale.

The last one is Fixed Wireless Access (FWA), which provides fibre-like speeds to homes and businesses in rural and urban areas in both developed and developing markets. So, rather than relying on fibre optic cables to provide fast internet speeds, 5G can do so through wireless connections.

It’s on the back of these use cases that Accenture—a global IT and consulting firm, reported that 5G could generate an additional $1.5 trillion in GDP, equivalent to 6.5% of US GDP in 2021 and 16 million new jobs in the US between 2021 and 2025.

How well has Nigeria progressed with the internet?

You know the saying: “strive for progress, not perfection?” That’s how we’re measuring Nigeria’s readiness for 5G. We’ll look at how much Nigeria has progressed in its internet journey—that’ll do to paint a vivid picture.

So we’ll start with the most obvious one — population. First of all, no one knows for sure how many people there are in Nigeria. It hasn’t conducted a headcount in a long time. But we’ve all accepted the estimate of 206 million given by the World Bank.

So Nigeria’s data becomes puzzling when you see that the Nigerian Communications Commission (NCC) reported the number of active telecom subscribers at 209 million as of July 2022, up 29% from July 2018. While there might be reasons for that, I think Nigeria doesn’t know itself. But I digress.

NCC also states that internet penetration—the number of people with access to and knowledge about the internet, be it via 2G, 3G, or 4G, stood at 80% (152 million) as of July 2022.

Meanwhile, the World Bank reported Nigeria’s internet adoption (i.e., the number of people with only access to the internet) at 36% of telephone subscribers in 2020. Although the number might have improved between then and now, there’s still a wide gap.

Broadband (3G and 4G) penetration stood at 44.5% in July 2022, up from 25% in July 2018. That means 85 million telephone subscribers are connected to the internet via fixed or mobile (wireless) broadband services. But fixed broadband only accounts for less than 1%, meaning mobile broadband is dominant (98.8%). However, it’s remarkable that broadband penetration grew faster between 2018 and 2019 than it did in the following three years. 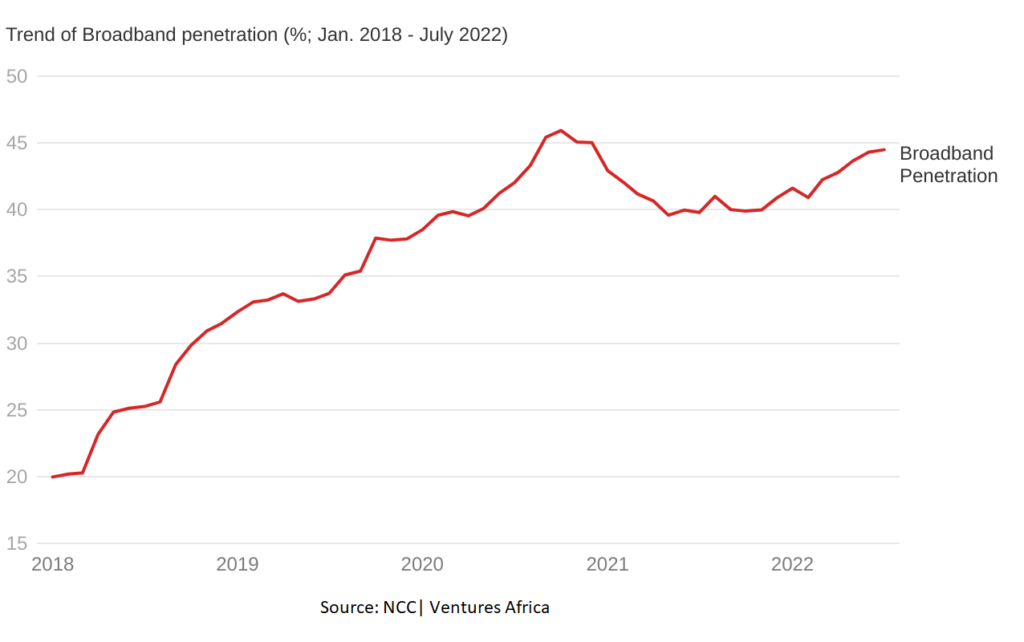 Also, Nigeria targeted a minimum average broadband speed of 25Mbps, lower than the global average of 29.8Mbps. Then it was 8Mbps. And although it has recorded progress since 2019, it’s still at 16.5Mbps.

Now let’s talk about 4G adoption. This one is crucial since it’s 5G’s immediate predecessor. There’s more noise about 4G penetration than about its adoption. But penetration only shows supply, while adoption shows demand. If the market hasn’t adopted 4G well enough, 5G’s chances are low. And from the numbers, Nigeria has barely scratched the surface of 4G adoption. According to the GSMA, 4G adoption stood at 6% of connected subscribers in 2019 (the latest available data), growing by just 5% from 2016. 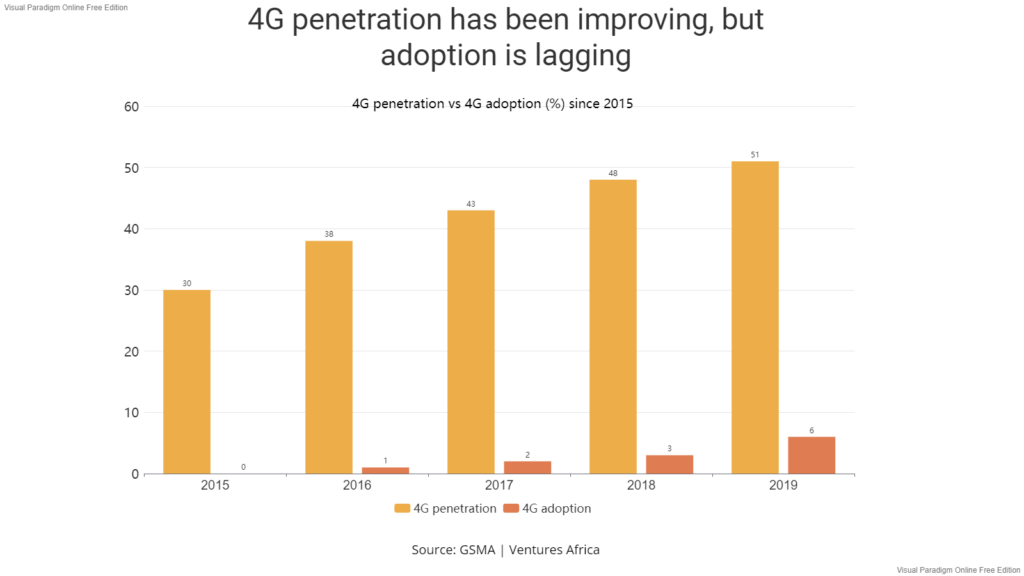 So is Nigeria ready for 5G?

Seeing how slow Nigeria has been in adopting 4G, one would worry that we might be writing another space story. The same things impeding 4G adoption will likely do the same for 5G.

Several factors have hindered the adoption of 4G, the first being cost. The Alliance for Affordable Internet estimates that only 44% of Nigerians have access to smartphones. The reason is that a (cheap) smartphone priced at $62 costs nearly 41% of a Nigerian’s average monthly income ($150). Meanwhile, in the USA, it only takes 12% of people’s incomes. And it’s not just that Nigeria is a low-income country. People spend up to 56% of their income on food because of gravity-defying inflation.

Since 4G-enabled smartphones are so expensive for Nigerians, many of them turn to 2G phones from China which cost between $15-$17 (17% of average monthly income).

Onboarding people is another hindrance. For instance, this report by New Telegraph shows how Nigerian mobile users are largely uneducated about 4G and how upgrading 3G users is often rigorous.

Also, network operators usually focus on more profitable (urban) areas. The challenges stated above are some of their reasons. Others are cable theft, vandalism and epileptic power supply, which have all hindered infrastructural improvement.

So even though there’s a lot of buzz around 5G’s entrance to Nigeria, it still needs time and nurturing. Even Ajay Awasthi, CEO of Spectranet, believes Nigeria needs another three years to have a stable 5G connection.

We’ll need to accept that 5G adoption will be slow in Nigeria because there are more problems than companies can solve. However, the market is large and still up for grabs. So even though it has a bumpy start, it likely won’t end up like Nigeria’s space dreams.