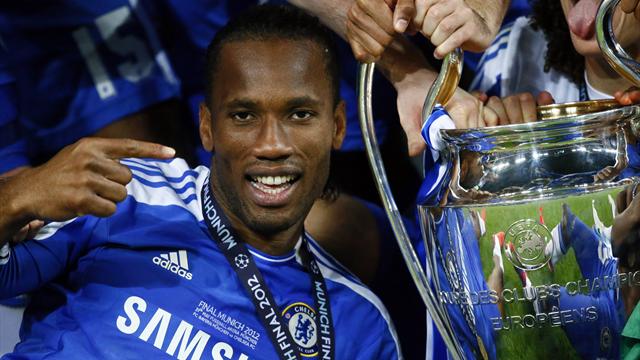 Will 120 Minutes In Munich Crown Drogba As Africa’s Best?

It is just a few days after Ivorian superstar, Didier Drogba, wrote his name in history books of his English club- Chelsea, as a club legend.
The Ivorian has been described in many quarters as the major reason Chelsea are European champions–a feat they laboured in vain to achieve since Roman Abrahamovic bought the club in 2003– and rightfully so.

Didier rose highest to bring Chelsea back into the game with 2 minutes of normal time left; turned villain a few minutes later conceding a penalty; but had the last laugh as his last spot kick ensured the Blues became Europe’s best club.

Maybe, just maybe, that singular act could see Drogba being crowned Africa’s best player for 2012 when the Confederation of African Football (CAF) hands out its prize later in the year.

But Manchester City’s Yaya Toure has had a fantastic year culminating in winning the English Premier League. I can hear someone screaming. Even Zambia’s Chris Katongo captained a less fancied side to win Africa’s top prize, another person may be thinking now. Yet again, I can see an unbiased Chelsea fan admitting that except for the final big games of the season, Drogba has had an unproductive year by his usual standard.

Well, truth be told, all three views above are right. But let’s look at this scenerio: if you took your time to critically analyse Saturday’s final, you’d have noticed that Chelsea’s Ashley Cole and Bayern’s Bastian Schweinsteiger were the best players on the pitch. Cole, as ever, put his body at just about everything Bayern threw at his side while Schweinstiger bossed the game from his withdrawn role in midfield. For much of the game Drogba was isolated. In fact, he rarely got any chance on goal until that 88th minute header. But that goal coupled with scoring the decisive penalty ensured the Ivorian was voted Man-of-the Match on Saturday night- above either Cole and Schweinsteiger.

That explanation not enough? Let’s critically look at all three players who may be nominated by CAF. Katongo plays his club football in China- a league not seen as one of the top flight. And while captaining his Chipolopolo side to a well deserved African Cup of Nations title counts as a huge achievement, not having a “superstar” status like a Drogba, Toure or Cameroon’s Samuel Eto’o may count against him.

That leaves us surely with Yaya and Drogba as front runners. Both players were instrumental in their national team’s run to the finals of the Nations Cup. Before Saturday’s Champions League final, City’s Yaya was the front-runner to retain his CAF Player of the Year crown. The former Barcelona star was instrumental to Man City’s first league title since 1968. So vital was he that his absence during the Nations Cup coincided with City’s poor run of form.

On the other hand, Drogba has had a league form to forget. With just 5 league goals, even the much maligned Fernando Torres has a better record in the league. But Drogba seemed to save his goals for the big occasions. He got one against Spurs in the FA Cup semis at Wembley and scored the winner as Chelsea beat Liverpool in the final. In the Champions League, he got the decisive first goal against Napoli in the round of 16; scored the winner against Barcelona in the semi-final; but ultimately, the match winning performance against Bayern Munich after 120 gruelling minutes may just about crown Didier Drogba the 2012 CAF African Footballer of the Year.

Do you agree with this? Or think either Yaya Toure or Chris Katongo should win the award? Or better still, do you think someone else made a better impact? Kindly drop your comment or join me on twitter @foskolo let’s have a chat.