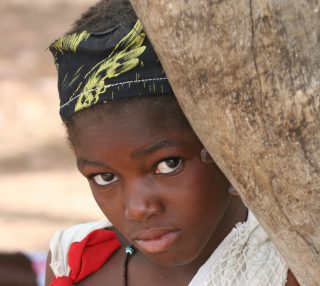 Why the cultural practice of breast ironing needs to stop

Teen years are a period of intense growth; not just physically, but also emotionally and intellectually. However, for most Cameroonian girls, this is a time when they are faced with an excruciating process of breast ironing which they suffer for years. At age 1o, Mirabel, a Cameroonian refugee living in Nigeria, was forced to endure this daily torture – having her breasts ironed with hot stones by her mother.

Mirabel lives in a refugee community in Ogoja, Cross River State, Nigeria and every morning, a neighbour would hold her legs firmly in place while her mother takes a burning hot pestle straight from the fire and presses it against her daughter’s chest in an attempt to flatten her breasts. “It feels like they are placing real fire on my breasts,” Mirabel says. “I have been in pain since the first day.” “I just don’t want her to become a target of boys around her. I’m aware that many boys here like to chase after little girls,” says Angela, her mother.

Breast ironing is a custom of massaging young girls chests with hot tools, spatulas and pestles being the most common in an attempt to flatten their developing breasts. This is done with the intention of postponing their first sexual relationships by making their bodies less attractive to men. Some Cameroonian mothers flatten their daughters’ breasts with hot spatulas in the hope that that will make them less attractive to men, and the consequences are tragic.

It is carried out when the girls are aged between 11 and 15, as they enter puberty, and is frequently done by the victim’s own family under the “misguided intention” of protecting her from rape and sexual harassment. The practice comes with extreme pain and psychological damage and also puts the young women at increased risk of developing cysts, infections and even cancer.

The procedure can be repeated for months, or even years, and is intended to either stop young girls developing breasts or to flatten them once they have.

The United Nations estimates that about 3.8 million girls are affected globally. It is particularly widespread in the West African nations of Cameroon, Guinea-Bissau, Chad, Togo and Benin. In Cameroon, up to 50 per cent of girls as young as ten years old undergo terribly painful breast ironing on a daily basis.

According to research by Gender Empowerment and Development (GeED), a non-governmental organization based in Yaounde, Cameroon, it was found that in nearly 60 percent of cases, the procedure is carried out by mothers.

“My mother told me that my breasts were going to attract men. So she brought me to a traditional healer. He grabbed a knife, cut my breasts, one after the other, and sucked the insides out with a tube. He told me: ‘If you don’t do it, people will think you’re a prostitute.’ I fainted from the pain. It took days to heal. Breasts are a gift from God.” –Lisette, 34 years old.

The ‘purpose’ of this practice is to protect young women from unwanted sexual attention or rape and to delay sexual activity and potential pregnancy. However, a senior protection specialist at the Caprecon Development and Peace Initiative, Salome Gambo, says: “This practice just ends up harming children and putting them at risk of severe complications. Families should rather channel their efforts towards educating their daughters on sex issues.”

Given the far-reaching effects and intentions behind breast ironing, the practice must stop. This can be done by applying the strategies used in the fight against female genital mutilation, as both practices are similar. From radical education and training to awareness strategies meant to orientate communities in Cameroon on the dangers of breast ironing and how highly ineffective it is in the fight against sexual abuse.

The government also has a role to play by creating policies against such practices and putting appropriate structures in place to prosecute perpetrators and protect victims. With this, assailants can be prosecuted under laws relating to common assault, child cruelty and grievous bodily harm. In addition, sexual abuse should be introduced as a criminal offence such that offenders are well punished with a deserving jail term that will serve as a warning.

With all of these in place, there will be progress towards ending breast ironing in Cameroon as the movement spreads to other affected regions globally.