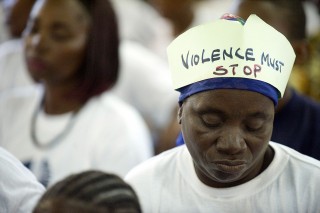 Nigeria needs a real cultural shift to protect its most vulnerable citizens from violent abuse.

Uzoma was married to Chinedu for seven years. Together, Uzoma and Chinedu were raising two girls and building up a business until Chinedu was killed in a traffic accident. During this time of grief and pain, Uzoma’s in-laws accused her of causing Chinedu’s death through ‘diabolical’ means. To make matters worse, she eventually discovered that her in-laws intended to take over her late husband’s business and that she was to be ‘inherited’ by one of her husband’s brothers in line with tradition. When Uzoma refused, she and her two daughters were kicked her out of their home. She is currently homeless.

Iniobong, a lively and boisterous girl, dreamt of becoming a scientist. When she was 12, her mother and other women from her family took her for a ceremony to mark her ‘becoming a woman.’ Her aspiration to finish school was hushed, and she was forced to undergo female genital mutilation. She was told this would prevent her from becoming sexually promiscuous and make her more fertile. The women in her family insisted that she must endure the pain so that men in her community would want to marry her. Her wedding to a 42 year old business associate of her father is planned for next month.

Akintunde had just finished his NYSC programme. He had hopes of becoming a design engineer, and was working to save money for school. During the recent elections, he went to the polling booth closest to his home to vote. While waiting, he was caught in crossfire between rival political parties. Tunde was seriously injured and is now languishing at a local care home. To this day, nobody has been arrested for the violent scene.

Despite the number of Nigerians like Uzoma, Iniobong and Akintunde who experience violence, until recently there was no comprehensive federal legislation in place to prevent this violence, protect survivors or punish perpetrators.

This changed last month. On 25th May, just 4 days to the end of his administration, Dr. Goodluck Ebele Jonathan, signed the Violence Against Persons (Prohibition) Bill into law. The act prohibits all forms of violence against persons in public and private life. But its implementation is at the heart of what is necessary to reduce violence in Nigeria. Significantly, the act, addresses forms of violence against women and girls that are often overlooked, unacknowledged and accepted.

A Pandemic in Nigeria

Violence against vulnerable persons, including women, is prevalent in Nigeria. In addition to physical, sexual and emotional abuse, many women in Nigeria experience female genital mutilation/circumcision, forceful ejection from home, and other harmful traditional practices stemming from long-held cultural beliefs. Section 55 of the penal code (applicable in Northern Nigeria) legalises corrective beating of a child, pupil, servant or wife as long as this does not cause grievous bodily harm. A 2012 report by the British Council stated that violence has become endemic in some public institutions including the police force and schools. Sexual harassment, including demanding sexual favours in return for employment or grades, is considered to be widespread.

Almost every one of the obstetricians surveyed in a study on the causes and management of violence against women said they had managed a case of violence, with the husband as perpetrator in an estimated 70 percent of cases. Spousal rape is often overlooked or tolerated and yet to be codified as a criminal offence in Nigeria.

The 2013 National Demographic and Health Survey showed women who are divorced, separated or widowed are far more likely to have experienced physical violence than other women with 44 percent of them reporting experiences of violence since age 15, compared with 25 percent of women who are married or living with their male partners, and 33 percnt of never married women. It also showed that women in urban areas are more likely than their rural counterparts to report having experienced physical violence. Although regional variation is stark, with 52 percent of women in the South-South reporting gender based violence compared to 13 percent in the North West, the low rate of reporting in the North is likely due to under-reporting.

Given the prevalence and intensity of violence against women and girls, it is not surprising that many are calling it a pandemic, equal in concern to HIV and malaria in Nigeria.

Despite this, the legal and judicial systems provide women with little protection against violence. While rape is punishable by life imprisonment in Nigeria, the laborious process of proving rape, the pain and shame of reliving the experience coupled with societal pressure to keep silent, victim blaming, and stigma, often dissuade women from reporting sexual violence. The police often dismiss cases of domestic violence as a ‘family affair’ and are reluctant to intervene even if the woman has sustained serious injury. Customary law offers even less protection. Under sharia, a husband can withdraw maintenance if his wife refuses sexual intercourse and a woman alleging rape must produce four witnesses. A 2010 Africa for Women’s Rights report reported that if the rape is not proved, a woman can be punished for adultery with a prison sentence or flogging.

This reality highlights the need for legal reforms and access to justice for women whose rights have been violated. Some states have laws in place to address domestic violence, such as the The Prohibition Against Domestic Violence Law No 15, 2007 of Lagos State and the Gender-Based Violation (Prohibition) Law, 2011 of Ekiti State. But, until the VAPP Act, there was no federal law specifically addressing sexual harassment and domestic violence in Nigeria.

The Violence Against Persons (Prohibition) Act

The Act is the result of 14 years of activism by civil society. Starting just after the transition to democracy with the formation of the Legislative Advocacy Coalition against Violence against Women (LACVAW) in 2001, activists have consistently pushed for national legislation prohibiting violence against women. The content of the Act is home grown, reflecting the realities of violence in Nigeria today, even as it incorporates provisions based on Nigeria’s commitment to international human rights principles. First presented to the House of Representatives in May 2002, the Bill on Violence Against Women became a Bill on Violence Against Persons in 2008 when it was harmonised with 8 other Bills on gender based violence in the National Assembly. It took another seven years for it to become law.

Under the newly enacted law, spousal battery, forceful ejection from home, forced financial dependence or economic abuse, harmful widowhood practices, female circumcision or genital mutilation, harmful traditional practices, substance attacks such as acid baths, political violence and violence by state actors (especially government security forces) are offences. Victims and survivors of violence are entitled to comprehensive medical, psychological, social and legal assistance by accredited service providers and government agencies, with their identities protected during court cases. The National Agency for the Prohibition of Trafficking in Persons (NAPTIP) is named as the service provider.

Currently, the applicability of the VAPP Act outside the FCT is a matter of legal debate. Whether it needs to be passed in all the 36 States of the Federation is unclear. However, 13 States have enacted related legislation. Also, other related federal legislation continues to gain traction. In May, Plateau state joined Imo, Ekiti, Kogi and Anambra and became the fifth state to pass the Gender and Equal Opportunities Act which seeks to eliminate of all forms of discrimination against women in education, employment, indigeneship and other spheres of life. In it lie the efforts to localise the 35 per cent affirmative action practice implemented at the federal level.

The length of time it has taken LACVAW to get this far is an indication of how deeply violence, particularly violence against vulnerable persons, is entrenched in our society. It is also indicative of how long it takes to change policy.

A new law prohibiting violence is not be sufficient enough to change Nigerian society but it does send a strong message that impunity for such action no longer prevails and that this issue is a matter of national concern. However the government, civil society, international donors and Nigerians need to take continued action and implement the VAPP Act to ensure perpetrators are convicted and, most importantly, that the culture that permits and enables violence changes.

The VAPP Act cannot be a piece of paper. This legislation will need to translate into having real meaning for the lives of Nigerians. We need to move towards a Nigeria where Uzoma, Iniobong and Tunde not only get justice, but also where cultural and traditional lifestyles and practices will undergo such a fundamental change that violence becomes the exception, not the rule.

Chinedu Anarado works for the British Council’s Nigeria Stability and Reconciliation Programme (NSRP). NSRP is working with state and non-state actors to improve Nigeria’s security and conflict management architecture and reduce the impact of violent conflict on vulnerable Nigerians, including women and girls.