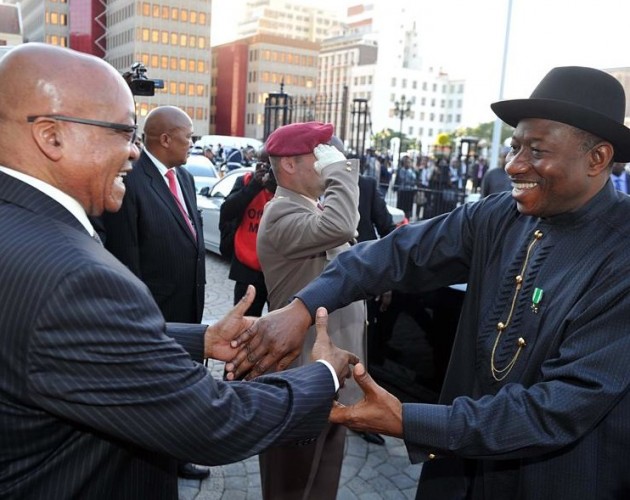 Why Nigeria Must Trade More With Africa

of a planned rebasing of the country’s gross domestic product (GDP), with the new figures to be made known in early 2014. “Historically, it has been said that 60 to 70 percent of Nigerians are engaged in agriculture,” BusinessDay quoted Nigeria’s Statistician-General, Yemi Kale as saying. “But the recent job survey showed 36 percent. This shows that since 1990 and now, a lot less people are involved in agriculture than they used to be when the rebasing was last done.” This demonstrates how the structure of Nigeria’s economy has changed over the years and gives indications of the eventual makeup of the country’s new GDP.

According to Samir Gadio, an Emerging Markets Strategist at Standard Bank, if Nigeria does rebase its GDP, the 40 percent upward revision would bring Nigeria’s GDP to about $370 billion, just shy of South Africa’s output ($391 billion forecast for 2012), with the country subsequently becoming the largest economy in Africa within a year or two. Some Africa watchers say the revision will only see Nigeria catch up with South Africa. “Latest IMF data puts Nigeria’s GDP in current USD as $273 billion in 2012. South Africa’s (projected) 2012 GDP in US dollars is estimated at $420 billion,” says Razia Khan, Head of Africa Research at Standard Chartered Bank. “With rebasing, Nigeria’s economy comes closer to catching up. It becomes a $382-billion economy roughly and only 10 percent smaller than South Africa.”

Whatever the actual figures, Nigeria has made impressive economic gains over the past decade, mostly driven by oil. According to Nigeria’s Finance Ministry, oil constitutes more than 80 percent of revenue and 95 percent of export income. Other revenue streams are emerging with investment in telecoms, e-commerce, and more recently, agriculture.

But Nigeria’s growth may be hampered by the concentration of its investment and trading partnerships in Europe, Asia and America, and its absence in Africa.

In February 2013, British Deputy High Commissioner to Nigeria, Peter Carter, predicted trade between Nigeria and UK would hit $12.2 billion by 2014, mostly coming from oil. In April 2013, Canada and Nigeria agreed to partner and explore crude oil export, raw materials and services exports to boost bilateral trade to about $6 billion. Trade between Nigeria and China is pegged at over $13 billion annually, also mostly in oil.

The Visa Africa Integration Index 2013, which measures the degree of economic integration within key trade corridors of Sub-Saharan Africa, describes Nigeria as one of the least regionally integrated economies on the continent. Nigeria’s global integration score of 40.6 percent represents its greater links with the rest of the world, while the regional score of 35.7 percent shows its fewer links with Africa.

The “depth” of Nigeria’s regional integration is scored at an even smaller 19.2 percent, meaning that even where trade relations exist, their commercial output is limited. By comparison, South Africa, Nigeria’s main rival for the spot of Africa’s leading economy, scores 63.3 percent, indicating greater economic links on both the regional and global level. This status must change for the country to truly lead Africa’s economic resurgence. “The size and influence of Nigeria in Africa cannot be overstated,” said the Visa report. “While the country’s levels of regional and global integration still are relatively low, Nigeria is likely to be one of the key drivers of integration in Africa and one of the primary forces of African integration with the rest of the world.”

According to the report, while Nigeria’s trade with other African countries, especially its West African neighbours, has increased over the past three years, it remains dismal in the key areas that drive growth – including trade, capital investments, information exchange and movement of people. Its dominance of the continent’s cultural market, with the popularity of Nollywood movies (reported to rake in up to $200 million a year in revenues) and musical exports like P-Square (virtually a household name across Africa), has reaped minimal economic dividends.

Evidence of the growing regional importance of Nigeria’s banking sector can be seen in its Economic Community of West Africa (ECOWAS) neighbour, Ghana. Nigeria’s Zenith Bank, Access Bank, First Bank, Guaranty Trust Bank and United Bank for Africa, all own stakes or subsidiaries in the country. Much of Nigeria’s economic interactions with other African countries consist of retail trading, which is often dogged by the complications of border crossing in the region. “We both just don’t do business,” said Ghanaian business journalist, Basiru Adam, of the economic relationship between Nigeria and Ghana at a training workshop organised by the Thomson Reuters Foundation in Addis Ababa recently.

Further afield in Eastern Africa, a few pockets of Nigerian investments can be found. In Uganda, significant investments have been made in the financial sector, including a 51-percent stake in National Insurance Company (NIC), a former state enterprise that is listed on the country’s stock exchange, by IGI. Other investments include a UBA subsidiary and IGI’s 49-percent stake in Global Trust Bank (GTB). NIC itself owns 60 percent of GTB. Uganda provides a strategic doorway into Eastern Africa, an emerging economic bloc that also includes Kenya, Tanzania and the Democratic Republic of Congo. In southern African countries like Zimbabwe, Nigerians are mostly engaged in small-scale retail and the sale of Nollywood films (mostly pirated) on the streets.

While individual businessmen like Alhaji Aliko Dangote, who has cement interests in 13 African countries, and Michael Adenuga, whose telecommunications company, Globacom, claims significant market share in Benin Republic and Ghana, have made substantial investments on the continent. But Nigeria has largely overlooked the benefits of economic integration, even as its growing market matures and modernizes, and the movement of goods and services, capital, information and people increases. By contrast, South Africa’s footprint covers most countries on the continent, notably through telecom giant MTN, financial institution Standard Bank and retail giants like Shoprite.

Part of Nigeria’s problem has been the failure to diversify from oil, which has led to the neglect of other pillars of commerce. “It has struggled to advance industrial complexity,” says Professor Adrian Saville, Chief Investment Officer, Cannon Asset Managers and co-author of the Visa Africa Integration Index 2013 report. “75.0 percent of Nigeria’s exports in 2010 were made up of crude oil and 4.7 percent of refined petroleum, while 18 percent of imports in 2010 were made up of refined petroleum and another 1 percent were made up of petroleum coke and petroleum jelly,” he furthers. According to Saville, “Nigeria [must start] increasingly refining and processing crude exports into more complex products – such as refined petroleum or petroleum jelly to replace imports with domestic production and, in a fuller state of economic development, start to sell refined products into export markets.”

The Visa report argues that Nigeria will be the main beneficiary of greater integration across Africa “as its growing market matures and modernises, and the demand for capital and a diversity of trade partners rises to address the needs of increasing industrialisation, a rising appetite for production and services and growing sophistication in lifestyles.” While it is clear Nigeria has a bright economic future, continued growth will only materialise if policy makers and business leaders begin to look outward to the rest of the continent as market for goods and services.

On a tablet?  Ventures Africa magazine app is now available on iOS and Google Play