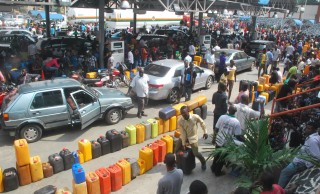 Virtually every local and international expert on development economics has called on the Nigerian government to stop the fuel subsidy that is burning a massive hole in its almost empty purse. Chief global lender, the IMF, has been at the forefront of the campaign against subsidized fuel. Subsidising countries, it’s MD Christine Lagarde says, “should think about reducing and phasing out the oil subsidies, taking advantage of the oil price and using public finance more wisely than in undifferentiated energy subsidies.” However, on Monday, Nigeria’s President Buhari made it clear he was not ready to heed that advice, yet.

Though cash-strapped and desperate for more money to pay its bills, removing subsidy–which has sucked off around $6.5 billion from the country in the past two years–still seems the hardest thing for the Nigerian government to do. The reason is as simple as put forward by President Buhari. “When you touch the price of petroleum products, that has the effect of triggering price rises on transportation, food and rents,” he said on Monday. The evidence of this can be found in the last fuel scarcity that occurred just before he was sworn in. The scarcity led to the doubling of the pump price of fuel and the tripling of the price of basic goods and services. For a country that has majority of its people in the lower income bracket, surviving an inflated cost of living became a struggle for basic survival. “There are many (Nigerians) who are jobless and will be affected by it,” the President Buhari said in defence of his retention of the subsidy.

The millions of jobless people raise up another, much more complex, reason why pulling the plug on subsidy has been difficult for successive Nigerian governments to do. Unable to create sufficient jobs for its people and failing to guarantee basic amenities such as electricity, pipe borne water and adequate infrastructure, the fuel subsidy remains one of the only direct positive impacts of the Federal government on the country’s teeming masses.

The low cost of fuel means even low income households can have a shot at creating their own electricity by the aid of generators, water through electrically pumped boreholes (the most common source of water in the country), and can afford goods and service, most of which have fuel at the base of their production chain. Africa’s richest man Aliko Dangote buttressed this point last month while defending the CBN’s position not to devalue the Naira; “It’s good enough if they remove the subsidy, but you can check with neighbouring countries like Senegal. If a poor person in Senegal can afford to pay subsidy, why can’t a poor person in Nigeria afford to pay. I think there must be something for the masses, which should be in terms of power, social insurance, good education system, good roads etc.”

President Buhari understands that at the moment, the only thing for the masses is still the subsidy, hence his decision to clean the system rather than clear it. “We have to go back to the good old days of transparency and accountability,” the President said. However, given the complicated nature of Nigeria’s oil sector, doing that will prove more difficult that saying it.