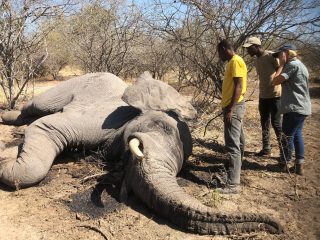 Why is there a rise in the death toll of elephants in Botswana?

Botswana is investigating the mysterious death of over a hundred elephants within the last three months in Ngamiland (North-West District). Usually, elephant deaths are associated with poaching but this time investigation concluded that the mass-dead were not plausible to poachers since the carcass had their tusk intact.

Additionally, some findings from the investigation ruled out the chances of the death occurring from poisoning or Anthrax (a deadly poison that lives in soil and on plants in a dormant state for years).

It would be recalled that last October, Anthrax killed over 100 elephants, while a recurring drought also contributed to the loss of some elephants.

‘’We are still experiencing elephants dying in the Okavango Panhandle. We also see elephants that show that they are sick and are on the verge of dying. As of Friday, we had a total count of 110 elephant carcasses,’’ Wildlife officer Dimakatso Ntsebe said.

In May, the Ministry of Environment, Natural Resources Conservation, and Tourism recorded 12 elephant deaths, while March witnessed almost four times (44) the number of losses, seen in the preceding month.

For more conclusive findings on the investigation, Botswana has sent animal samples to its neighboring country, South Africa for further forensic analysis.

While the country awaits the result of the investigation, the government has also warned villagers against consuming the carcasses as ‘bush meat‘ due to health and safety reasons.

Botswana holds the largest population of elephants in the world with more than 130,000. The highest parade of the mammals can be found in the Chobe National Park and Linyanti region.

Unfortunately, apart from natural death, the population of elephants is also threatened by poaching and  consumption. Poaching alone accounted for nearly 400 elephant deaths between 2017 and the early part of 2018.

The deaths of over 250 elephants in less than a year call for more elaborate research that can improve the ecosystem for the animals, also, there is a pressing need for deeper investigations to prevent similar cases in the future.

The current progression of elephant deaths from either poisoning or unknown causes in Botswana will claim the lives of over 343 elephants yearly, excluding mortality from poaching activities.