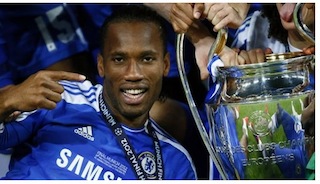 Why Drogba’s Proposed China Move Is A Win-Win Situation

It is June already. And for Ivorian captain Didier Drogba, it is expected that a decision on his future will be made sooner rather than later.

A fortnight ago as reported here, Drogba confirmed his contract with Chelsea would end this summer. After eight productive years, it is befitting that the Ivorian’s last kick for the London club earned the Blues the biggest trophy in European club football.

But now the 34 year old must make a choice where he would pitch his tent for the next season of his career. His former club Marseille want him back in France; Spanish giants Real Madrid and Barcelona have at one time or the other been linked with him; but it seems Drogba may be heading to China. And deservedly so!

Why? Well, Looking at it from monetary as well as football perspectives, Drogba will be in a win-win situation if (or better still when) he makes his Chinese move official.

From a business angle, the Chinese club Shangai Shenhua are reportedly willing to offer him a 2 year contract worth about 150,000 pounds a week while the two Spanish clubs have been put off by those demands. With the current economic crunch in Spain at it’s highest, neither Madrid nor Barca are willing to pay that high for someone who in reality, will be a squad player considering the amount of talent at their disposal. And with this being the last big pay cheque day for the Ivorian, he certainly has to make most of his last transfer dealings- since he’s won just about every trophy in European club football.

More so, the Chinese league is an emerging market. Obviously, attracting super stars like Drogba will benefit the Asian nation in general and particularly the club that signs him. More shirt sales, an increased attendance and who knows, Drogba may even make more cash from endorsements and image rights.

However, while legitimately looking at earnings, it must be clear that Didier is first and foremost a football player. Critics might say going to China shows less ambition when he could still play for many European football super powers. True! But Drogba himself pointed out that his reason for leaving Chelsea was because he couldn’t bear the thought of sitting on the bench next season. Well, with Ronaldo and Messi firing on all cylinders, Drogba’s role if he moves to Spain will be where he doesn’t want: on the bench.

Moving to China will give the Ivorian the much needed playing time he craves and importantly, with less pressure and intensity associated with the big leagues in Europe.

At the risk of sounding a bit contradictory, Drogba still has one trophy eluding him. His penalty miss in February was largely responsible for his country not winning their second African Cup of Nations crown. That must surely hurt. Next year’s tournament in South Africa may be Drogba’s last opportunity to right that wrong.

In that case, regular football in China as opposed to sitting on the bench for Barcelona or Madrid is just about what every Ivorian will want for their talisman.

Didier Drogba will be in a win-win situation when he finally goes to Asia.