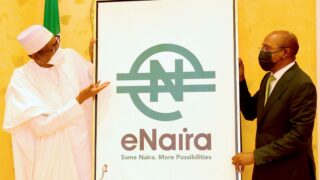 Why does the e-naira have so little adoption?

On October 25th, 2021, Nigeria became the first African country to launch a Central Bank Digital Currency (CBDC), called the e-Naira. Weeks before its launch, the e-Naira was the most discussed topic in Nigeria’s financial space. There was plenty of speculation, fear and optimism. And rightly so: only eight countries globally had successfully launched a CBDC before then, and none of them was a neighbour. But less than six months after, the e-Naira is struggling to gain adoption among Nigerians, and that’s not even the worst part.

In February, the Central Bank of Nigeria (CBN) appealed to citizens to embrace the e-naira, a sharp contrast from when it boasted of gaining nearly half a million users in its first three weeks. In a quick poll by Ventures Africa, only 4 per cent of respondents used the e-naira. But what’s more concerning is that 64 per cent don’t even know about it.

We didn’t stop there. We went to the streets, sampled and surveyed POS merchants, who have been salient players in driving financial inclusion across the nation. But 67 per cent of our respondents did not know what the e-naira is, and only 16 per cent have ever downloaded the wallet, none of which used it.

The sentiment was the same among retail merchants and traders. Only 30 per cent had any knowledge about the e-naira, and none of them used it. “How is it different from regular mobile bank transactions?” asked Daniel, a Lagos-based restaurant owner.

The banks ought to be the primary distributors of the e-naira. However, we found that even bankers are not fans of this currency. A staff of Heritage Bank, who asked to be anonymous, disclosed that the bank conducted a mandatory orientation program and made them all download the wallet. However, it did not make them any less uninterested. More so, there was not much follow up from the bank after most of the staff had a hard time registering. “We were to receive a confirmation mail in the email registered on our BVN, which most of us did not,” they said. “It was a lot of back and forth setting it up. Eventually, we found our way around it, but the system crashed the next day. I think we just lost interest after that.” Our source also claims they have not seen any customer inquire about the e-naira since October last year.

Six months after its launch, the future of the e-naira looks bleak as there is little to no demand for it. But before we can call it a failed project, we would need to ascertain that it is not fulfilling the purposes for which the CBN launched it.

Why did the CBN launch the e-naira?

The CBN arguably does not plan for the e-naira to become popular, at least not anytime soon, because it had an underwhelming product launch. While there was so much hype about the CBDC, it offered little to no value to most of its users, judging by the user reviews. Aside from the poor user experience and interface, the product is quite hard to understand. But more importantly, if the CBN wanted its CBDC to become popular, it would have to give users value that banks cannot. That value can range from better interest rates on deposits to easier forex transactions or removing any other bottleneck users face with the banks regularly. However, that’s not the case. Instead, there is even a limit on the amount of money e-naira wallets can handle. So if it isn’t solving these problems, why did the CBN launch this CBDC?

For some years now, cryptocurrencies have become increasingly popular globally. What started as a dream for a new, permissionless digital financial system has evolved into a streak of innovations to create a new iteration of the internet and even a digital life.

However, since the fundamental appeal of cryptocurrencies is to exist as decentralised alternatives to fiat, they pose a problem to central banks, which originally control monetary supply. So it’s no surprise that central banks, in many cases, resorted to stringent regulations and sanctions against cryptocurrencies. Cryptocurrencies want to cut banks out of the system, meaning that the government would lose their main route of regulating and influencing the economy. So, they needed to fight back.

But, you see, regulating cryptocurrencies is not enough. It’s difficult to contain a technology-backed monetary system with no single/central point of failure. So central banks started researching ways to use the same underlying technology behind cryptocurrencies — the blockchain– to create their versions of these digital currencies, ones that they control. This point is where the e-naira comes in. It’s safe to call it an ‘if you can’t beat them, copy them’ move. Only this time, we have a blockchain version of an already failing currency.

But let’s assume there are bigger plans for the e-naira besides copying cryptos. At least during its launch, President Muhammadu Buhari told the media he expects the e-naira to boost Nigeria’s GDP by $29billion over the next ten years. The roadmap to this estimate was quite vague. But he did hint that “CBDCs can help increase remittances, foster cross border trade, improve financial inclusion, make Monetary Policy more effective, and enable the government to send direct payments to citizens eligible for specific welfare of Nigerians.” Theoretically, most of this statement is true. But currently, the e-naira does none of these things. So it’s either that the e-naira was just a rushed copycat move or a failed attempt at doing all of the above listed.

Besides, the CBN only wanted to create a digital version of the e-naira. It doesn’t plan to disrupt the banking sector like cryptocurrencies. That explains why it did not give the e-naira wallet any other advantage beside containing digital money. If, for instance, it made deposits accrue more interests than banks or didn’t put a limit on deposits, it would have taken customers away from banks. But it does propose the eNaira as a cheaper means of making payments and transfers.

On the one hand, that can force a new wave of innovation and competitive development among banks. But, on the other hand, it would mean the central bank would have to become customer-focused and start worrying about who to lend money to when banks shut down. More so, if a CBDC became the reason the banks shut down, it has practically fast-tracked the work of cryptocurrencies in disrupting traditional finance. Nonetheless, it would have the obvious problem of being a single point of failure for the entire nation’s fiscal system.

How should the CBN have launched the e-naira?

The e-naira is not altogether a bad idea. CBDCs have great potential. We have previously shown how Africa’s future of money is digital. But we can’t deny that the execution of “Project Giant” was flawed.

Nigeria seems to have a lot in common with China. Aside from taking worrisome loans from China, it also shows an affinity for its internet regulation policy and is unfriendly towards cryptocurrencies. Then in 2021, Nigeria launched the e-naira just a few months after China started testing its CBDC, the digital yuan. The difference, in this case, is that China has a more strategic execution. It’s been one year since it started, and it is still in the pilot phase and not yet available to everyone. The digital yuan has been piloted in various Chinese cities and was used in more than $8 billion worth of transactions in the second half of 2021. As of January, it had gained over 260 million users.

China’s strategy is not only to roll out slowly but also to carefully integrate the digital yuan into the lives of its citizens. For instance, Chinese people can transact on WeChat, the country’s largest social platform, using the digital yuan. Then it rolled it out for use at the Beijing Winter Olympics, where people transacted over 2 million yuan every day. You can tell that China has been ensuring its citizens can use the digital yuan in their everyday lives.

The CBN needed an even more holistic approach to launching a CBDC. Unlike China, Nigeria’s mobile technology sector is still in a growth phase. Fintech is a current tech wave because of the large unbanked and underserved population. So it needed to have provided hardware infrastructure like PoS devices for agents to use. PoS for cryptocurrencies exist already. That would have aided both awareness and distribution of the e-naira. Instead, it chose to go through the banks, who then have to bear the costs of onboarding and distribution.

Also, there is little evidence that low-income earners, who constitute a large portion of Nigeria’s population, are willing to migrate from paper to digital money. So it would take a lot of user education (probably even an incentive-driven approach) to make people embrace it.

Over 90 countries are researching and experimenting CBDCs today, many of which have more technological infrastructure than Nigeria. There’s a reason most of them launched anything — they haven’t figured out a way to make it work for the everyday citizen. Because what’s the point of creating money people won’t want to spend?