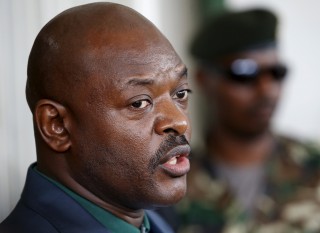 Why a “Behind the scenes” approach may not work in Burundi

Over the weekend, the United States called on the African Union to “work behind the scenes” to convince Burundi’s president, Pierre Nkurunziza, of the need for an African Union (AU) peace-keeping force in Burundi. The conflict in Burundi, which started last year, has continued for months after President Pierre Nkurunziza refused to step down, the main bone of contention being a controversial presidential term limit in Burundi’s constitution. This conflict has seen hundreds of people die, with hundreds of thousands more displaced.

This call by the United States ambassador to the United Nations, Samantha Power, came after representatives of the United Nations Security Council, along with its counterparts from the AU spent a day in Burundi meeting with president Pierre Nkurunziza. Late last year, Nkurunziza rejected the help of the African Union after the Union agreed to send 5000 peacekeepers to Burundi. Nkurunziza called the intervention an “invading force” and proclaimed that Burundi would defend itself. Samantha Power further encouraged the AU faction, led by the Ugandan president, Yoweri Museveni, at the meeting with President Nkurunziza.

However, below are some reasons why this new action might not work:

First of all, it appears that the AU and the UN have to agree on the correct approach to utilize. Last year, the African Union agreed on deploying 5000 peacekeeping soldiers to Burundi, a decision that Nkurunziza was clearly against. Prior to the United Nations Security Council’s visit to Burundi, reports say the UN’s Security Council met with AU leaders at the organisation’s headquarters in Addis Ababa, Ethiopia. One of the issues discussed was how much force or persuasion was required in Burundi presently.

According to reports, there was a little misunderstanding; it appears the AU planned on sending 5000 troops while the UN’s Security Council insisted, instead, on a 100 AU human rights and military observers to Burundi. The two organizations seem to be at a loggerhead, a situation that could delay intervention in Burundi. However, Russian ambassador to the UN, Petr lliichev, has said that the UN would leave Africa to solve its own problems with “African solutions”, suggesting that they might leave the AU alone this time.

However, if the United Nations ratifies the AU’s plan, then there could be another stumbling block in the shape of President Pierre Nkurunziza. Samantha Power’s call for a behind-the-scenes convincing might not work, mostly because, apart from his refusal to grant the AU permission to send troops last year to Burundi, he has repeatedly boycotted reconciliatory meetings between him and the leaders of Burundi’s opposition parties. The latest was last week when the neighbouring East African nation, Tanzania, organized a meeting between the two parties, but representatives from Burundi refused to attend.

The only way the African Union forces can override the Burundian government is if it thinks there are cases of “genocide, war crimes and crimes against humanity.” However, waiting till there are actually cases of genocide (analysts say could happen soon) could mean waiting until things escalate into a full blown civil war and even more lives would be lost in this case. This is surely putting the African Union in a dilemma.