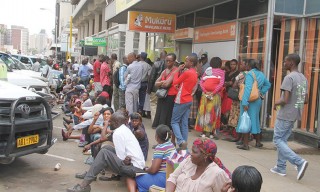 Where has all the money in Zimbabwe gone?

In barely two months, the daily withdrawal limit in Zimbabwe has gone down from $1000 to $500 and then to $300. This simply means that daily withdrawal limits now average between $300-$100, while some banks are only permitting as little as $50. This has resulted in long queues at banks as people strive everyday to get cash, which has become an invaluable commodity in itself.

The shortage of US dollar notes, the most prominent currency adopted by Zimbabwe in 2009, has worsened in recent times resulting in long winding queues and black markets where the dollar is unusually trading against itself. The situation has deteriorated substantially and travel operators are asking their customers to bring their own currency in order to avoid inevitable complications. In response to this crisis, which analysts argue is reminiscent of the hyperinflation experienced in 2000 to 2009, the government plans to introduce bond notes pegged to the US currency by October 2016.

The Dollar trading against itself in Zimbabwe

$1 now costs as much as $1.07 on the black market in Zimbabwe. A new black market was created in the country on the back of the cash shortage crisis seven years after the country abolished its own currency. The crisis worsened in the last few weeks leading to the shutdown of ATM’s and lower withdrawal limits by banks, which claim to seek the equitable distribution of cash among its depositors. Dollars are presently sold for dollar transfers at the rate of $1.07 on the black market, and this is expected to worsen as the government intends to introduce bond notes pegged to the US dollar.

The bond notes will not be acceptable by foreign parties and thus, can only be used internally in a bid to mitigate its currency spilling out of the country in the form of imports. Critics point out that the introduction of bond notes will only force importers and remittance- senders to the black market. “I just paid $1.07 per dollar for a $2 000 transaction, because my steel supplier is now accepting only hard cash and has already warned me that they won’t accept bond notes. So, now I’ve raised my prices 7 percent, but will I be able to sell? I’m doubtful,” said Chiweshe, a local manufacturer.

The planned bond notes are backed by a new $200 million bond facility from AfreximBank and are advertised to boost internal trade, cut on externalisation of the US dollar by individuals and companies and ease cash shortages in the economy. However, the wisdom in making this announcement so far in advance is questionable, at the least as this has given depositors a chance to wipe out their accounts. The shortage of cash and the impending introduction of bond notes following the announcement by the CBZ has led to a situation of ‘cash burning’—where depositors are eager to get all their money out of the banking system. This is eerily reminiscent of landscape of the 2007 and 2008 banking sector characterised by over 10,000 percent inflation.

What caused the crisis?

“Spending on imports is causing the crisis, we as a nation are consuming more than we are producing,” remarked Mr Guvamatanga, Managing director of Barclays Zimbabwe at the 35th annual general meeting in May this year.

According to the figures published by Zimbabwe’s National Statistics Agency, they had a $3 billion trade deficit from Jan 2015 to November 2015 importing goods worth over 5.5 billion dollars. Import reliance in effect suggests that most of the currency in the economy is externalized through imports creating an unsustainable spending pattern.

The crisis is further exacerbated by executives and companies who continue to siphon their funds out of the country. The Central bank Chief, John Mangudya who blames the current cash shortages on massive externalisation said in February that individuals and corporates externalised $1,8 billion in 2015. “What you find is that companies make profit and they want to ship it out of the country in the middle of the night,” said the CEO of Frist Mutual holdings Douglas Hoto.

“If for example, myself as a chief executive officer is withdrawing all my cash and putting it under my pillow and I am asking my clients to put money into my business, what message am I sending across? We need the business and government to say that they are still investing in Zimbabwe,” he said.

The vice president of the reserve bank of Zimbabwe Mr Mnangagwa additionally faults the sourcing of US dollars in the country by its southern African neighbours in the SADC (Southern African Development Community), a regional organisation consisting of 14 Member Countries, as putting a strain on the amount of currency in daily circulation.

The country, which had well over 100 million percent inflation in 2008, abandoned its currency the Zimbabwean dollar and adopted several currencies including the US dollar, Yuan, South African rand and the pound. However the US dollar has since become its local currency as 90 percent of the transactions are conducted in this currency.

Acquiring the dollar as its local currency meant that it had to import the currency which it had no control over in terms of supply. Investors were thus relied upon to supply this currency into the economy creating an economic environment largely dependent on the cash from outsiders to restore the liquidity of banks. Following an announcement last year where the indigenous Minister Patrick Zhawao stated that foreign investors in the country had to comply with country’s indigenization act or would be shutdown, there was widespread panic amongst investors triggering capital flight and a loss of confidence in the economic environment.

The aforementioned indigenous law enacted in 2008 compelled all foreign entities to give away 51 percent stakes of their stakes to locals. The announcement was met with criticism from investors and analysts alike and has since taken a softer tone with the government announcing its commitment to developing models allowing for a lesser share than 51 percent but the sentiment did little to repair the damage. This announcement was made last year igniting capital flight, which has come to a head this year, culminating in the shortage of cash.

Adopt the Rand as a panacea?

Adopting the South African rand as Zimbabwe’s major transacting currency is a move recommended by business analysts as a panacea to the cash shortages. This push by the Bankers Association of Zimbabwe is argued to increase the country’s liquidity and reduce the concentration of risk associated with the over reliance of the US dollar. South Africa is Zimbabwe’s biggest trading partner, according to the central bank of Zimbabwe (CBZ), accounting for 60 percent of imports, 40 percent of exports. 70 percent of tourists come from its southern neighbour which is an important trading partner and a major source of foreign exchange.

Proponents further argue that the greenback in its own right is too strong for the economy and the rand is not as prone to money laundering and capital flight as the US dollar which lost Zimbabwe $1.8 million through capital flows.