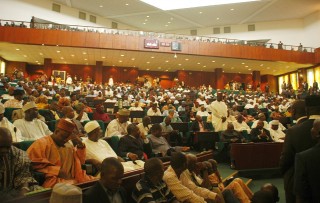 When the Lower House says “No!” A full breakdown of Buhari’s $22.7 billion loan request

On Thursday, 5th of March 2020, the Nigerian Upper House approved President Muhammadu Buhari’s $22.7 billion external loan application, after a 40 mins deliberation, prior to an argument between the Senate president and a couple of Lawmakers that spanned beyond 30 minutes over the request.  The approval came after a report by the Senate Committee on Local and Foreign Debts, presented by Sen. Clifford Ordia (PDP-Edo), which was considered. However, the request went into a coma the moment it reached the Lower House as it was met with an indefinite suspension.

In the president’s letter, Buhari explained that the external borrowing plan is geared towards projects that cut across all sectors with special emphasis on infrastructure, agriculture, health, education, water supply, growth, and employment generation.

However, the Speaker of the House of Representatives, Femi Gbajabiamila, has said the lower house will postpone the loan request as it had listed the report by its Committee on Aids. He also cited Loans and Debt Management on the 2016–2018 Federal Government External Borrowing (Rolling) Plan as the last item for consideration.

When Sen.Clifford Ordia (PDP-Edo), the Chairman of the Committee on Local and Foreign Debts on the Federal Government’s Borrowing Plan, began to defend the loan request, he presented his report in a manner that may have facilitated the swift approval of the request.

The Nigerian senator started by reminding the House of Senate that it had, on December 17, 2019, considered the request for the external borrowing plan after which the request was referred to the committee for further legislative input.

He also argued that the President’s request was in consonance with the provisions of the Debt Management Office (DMO) Establishment Act, 2003 and Fiscal Responsibility Commission (FRC) Act 2007, which requires the president to seek and obtain approval from the National Assembly with respect to external borrowings.

He reported that the committee had invite government Ministries, Departments and Agencies (MDAs) to defend their various requests in the loan, adding that the committee was informed by the Minister of Finance (Zainab Ahmed), and the DMO, that the borrowing plan would be sustainable.

Projects attached to the loan

There have been different speculations over the source that would fund the loan. Nonetheless, the proposed projects attached to the loan are mostly infrastructural and have the capacity to spur economic growth through job creation, stimulation of commercial activities and cause an increase in manufacturing activities. Benefactors of the loan are the Ministries of Power, Transportation, FCT, Works Housing and Agriculture.

The loan is to be used to service the completion of the critical infrastructure projects under the 2016–2018 External Borrowing Plan which includes the Nigeria Electricity Transmission and Access Project ($364,000,000); Social Inclusion and Welfare Advancement project, renamed National Social Safety Net Project, ($500,000) and the Economic Reforms and Governance Project, renamed Fiscal Governance Project ($200,000,000).

The majority and minority leaders, Abdulahi Yahaya and Enyinnaya Abaribe have suggested that the report be considered in detail to provide the senate with full knowledge of lined items and details of the request. They faulted the exclusion of some parts of the country in the proposed projects and raised concerns about the lack of details in the request.

Adamu Aliero was the first to raise concerns. He wondered if Nigeria is borrowing the money to construct a road from Lagos to Abidjan and if Nigeria was so generous to consider this up to Abidjan. He had described the loan as lopsided.

“The application of this loan is lopsided and I want to say that other geo-political zones should also be considered.” He went on to say the country has dilapidated roads all over and argued that he did not see why such a huge amount of money will be concentrated in only one section of the country. He also said that when the Senate came to the clause, it “should include critical parts that should be covered on this loan.”

For any bill or decision that needs the approval of the Nigerian National Assembly to fly, it needs to earn a two-thirds majority vote from the house. The President’s request may have had success in the Upper House, but an indefinite postponement in the Lower House shows the House’s disinterest in granting the loan a smooth passage at a time when the nation is forced to cut down on its budget after a sharp decline in global oil prices.