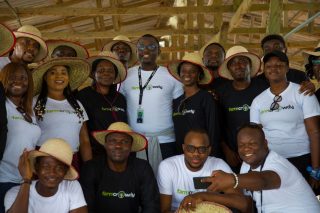 What we know about Farmcrowdy’s new bus hailing service

Nigeria’s first digital agricultural platform, Farmcrowdy has launched a bus hailing service, PlentyWaka, in the country’s commercial capital, Lagos. The pilot phase of this service was commissioned in August at the Pistis Event Centre, Lekki with 25 new 15-seater buses.

According to Chief Executive Officer (CEO) Onyeka Akumah, “With PlentyWaka, you can avoid the rush, the noise, and other inconveniences, while you order a ride comfortably from the app.”

“What is more interesting is, not only will you able to order your ride, you can book your preferred seat. For some, that’s a spot by the window and for some others, it’s a seat on the last row,” the CEO added.

With the applications available on Google Play Store and Apple store, customers will start by downloading PlentyWaka, register an email address as well as pick up and drop off location. One will be able to see the buses available and select a timing that is convenient for the user.

Onyeka also revealed that the drivers of these vehicles are paid a monthly salary – a sum higher than some other ride-hailing apps – but after a period of three years, drivers will eventually own the bus.

The new service will be competing with other similar ride services in the state such as OBus, SWVL and the traditional “yellow buses.” But Onyeka explains that the venture is “not just a business model for making money, we’re empowering the drivers and creating jobs.”

Without a doubt, the transport space of Lagos is an attractive investment option with untapped opportunities. However, with Farmcrowdy being a purely agricultural startup founded just three years ago, its decision to invest in an entirely different and capital-intensive sector such as transportation is quite surprising.

The expansion is even more shocking considering the fact that the company’s founder and Chief Executive, Onyeka Akumah was quoted recently to have suggested that Nigerian entrepreneurs fail because they focus on too many ventures at once.

Ventures Africa contacted Farmcrowdy to comment on this expansion, but there hasn’t been a response so far.

PlentyWaka is also sponsored by users of Crowdyvest, an investment platform introduced by Farmcrowdy this year. The platform allows people to invest in agriculture and transportation with a minimum capital of #60,000 ($160) and receive 20 percent in annual returns.