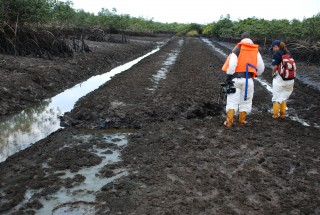 Why the clean up of Ogoni land is important to Nigerians

The Nigerian President, Muhammadu Buhari, on Wednesday approved actions to hasten the clean up of Ogoni land that has been destroyed by oil spillage, caused by Shell’s exploration activities. This will be the world’s biggest environmental clean-up in history. This development is a sign that the issue of environmental degradation in Ogoni land, which has lingered for years is finally close to an end and the long delayed implementation of the UNEP report on environmental degradation published four years ago may eventually see the light of the day.

This proposed action signifies that the struggle of the Ogoni people, caused by Shell’s exploration activities and the death of the environmental activist Ken Saro-Wiwa and many others was not in vain.

The struggle of the Ogoni people

The tussle of Ogoni land with Shell’s drilling activities, dates as far back as the 1970s, a decade after Dutch’s oil giant, Shell started exploration in the oil rich southern town. The government refused to listen to the plight of the people due to the huge amount of money they were making from the oil company. On the other hand, it was alleged that shell did little to help the situation, instead they continually enrich the government by bribing. Ogoni people have continued to demand for environmental, social and economic justice, a cause for which many died and properties were destroyed.

Despite being a home for oil installations and refineries, the level of poverty in Ogoni land is despicable. Health facilities are not functioning optimally and school buildings are collapsing. Instead of gaining from the production of oil in their community, they have been neglected by the government.

The death of Ken Saro Wiwa

Saro-Wiwa who was consistently concerned about the treatment of Ogoni by Nigerian Federation was killed under the military president Sani Abacha’s regime in 1993. Saro-Wiwa, who lost his life due to the problems facing his community Ogoni land had dedicated himself solely to solving the problems of the oil producing regions of the Niger Delta. With a focus on his homeland, he launched a non-violent movement for social and ecological justice known as the Movement for the Survival of the Ogoni People (MOSOP). He attacked the oil companies and the Nigerian government accusing them of waging an ecological war against the Ogoni and causing the genocide of the Ogoni people.

“The Ogoni have been gradually ground to dust by the combined effort of the multi-national oil company, Shell Petroleum Development Company, the murderous ethnic majority in Nigeria and the country’s military dictatorships.” – Ken Saro-Wiwa, 1992

The level of oil spillage in Nigeria: