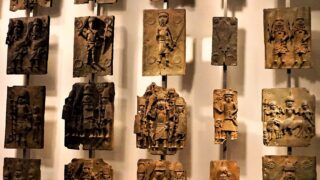 What is the worth of Nigeria’s plundered artefacts

At the recent Humboldt Forum in Berlin, renowned Nigerian novelist Chimamanda Ngozi Adichie urged European nations with historic African artefacts to return them to their countries of origin. According to her, some of the artefacts are sacred and speak to the dignity of the people, their worldview, and their aspirations.

Adichie argues that it is condescending for European countries to say they cannot return the artefacts because they think African nations cannot care for them. Although not all of the artefacts can be returned, the feminist icon suggests that France, the United Kingdom, and the Vatican follow Germany’s lead and return “the ones that are sacred.” “Art lives in history, and history lives in art. Much of what we call African arts are also documents, they tell African stories,” she said.

One of such sacred artefacts that have raised controversies over time is the Benin Bronzes. They are a group of metal plaques and sculptures that decorated the ancient royal palace of Benin Kingdom before the city got raided by invaders (Colonialists). The Bronzes, arguably considered some of the most valuable African works of art, were plundered from the Benin Kingdom in 1897, and most of them, sold at auctions. Because of their craftsmanship, the artefacts held value in Europe, and curators at the British Museum, at the time, compared them with the best of Italian and Greek sculptures.

A report recorded that some 4,000 intricate sculptures were stolen from the Oba’s palace during the invasion. However, while the majority of the looted artefacts were auctioned, some found their way to the private mantlepieces of colonial soldiers who took them as a bounty of war.

The British Museum holds the largest and most significant collection of artefacts and about 40 per cent of the looted art is in it. There are around 900 objects from the historic kingdom of Benin in the British museum’s collection, and over 100 can be seen in a permanent changing display within the museum’s galleries. The worth of these artefacts is better described as invaluable because, beyond their monetary value, which cannot be quantified, they hold deep cultural and spiritual values, as Adichie said in Berlin.

A group of investigative journalists reported that it is difficult to peg a particular price for a bronze since it undoubtedly holds an intangible value. In 2001, a community of heirs, Meyer heirs, received 6.9 million euros for the possession of 53 Benin objects. Also in 2009, looted artefacts were estimated to be worth over 1.3 billion euros (N313 billion).

Nigeria has been calling for the return of these artefacts to Benin city for a long time. One of such unforgettable calls was in the 1970s when the organizers of major black art and culture in Lagos, asked the British Museum for a 16th-century ivory mask of a famous Oba’s mother. They wanted to borrow the artefact to serve as the centrepiece of the 1977 event, but the British Museum declined and said it was too fragile to travel.

But earlier in March, the Humboldt Forum agreed to return the looted Benin kingdom bronzes to Nigeria after summer. Also, Berlin agreed to repatriate more than 500 historical objects comprising of 440 bronzes held at its Ethnological Museum in the German capital. While these calls have tried to yield the above results, they are still not heeded by the British Museum, which has the largest number of these works.

Preparations for the incoming artefacts

There are plans by the Benin royal family and the Nigerian local and national governments to open a museum in Benin City in 2023 with at least 300 Benin Bronzes. Art pieces in this museum will come mainly from the collections of 10 major European museums, such as the Humboldt Forum in Berlin, the Weltmuseum in Vienna, and the British Museum. They will initially be on loan for three years, with the possibility to renew. Or, when those loans run out, other Benin Bronzes could replace them.

Victor Ehikhamenor’s thought on the matter

To understand why European nations have held on to these artefacts, and remain unwilling to repatriate them, Ventures Africa spoke with widely acclaimed artist, writer, and photographer, Victor Ehikhamenor. Ehikhamenor is one of the loudest voices clamouring for the unconditional repatriation of the looted artefacts.

The artist noted that the artefacts hold so much importance, and they are things a lot of people go to see in European museums. Because of the artistry put into it, a lot of their artists reference the art. “If they remove these works from their museums, it will affect them economically. They would rather hold on to these things and feel that they have the right to them even though many of them were looted,” he stated.

He acknowledged that while Germany has made efforts to return some artefacts, the British museum is still holding tightly to the artefacts in their possession because of a policy that disallows them from returning them to where they rightly belong.

For Ehikhamenor, the reason for the return of the Benin artefacts goes beyond tourism. He sees them as objects of power. “If your dad gives you a pen, is it that there are no other pens used in writing? No. Irrespective of how expensive other pens can be, what matters is the relationship and the spirituality behind the pen given to you by your dad.”

The artist advised people to discard the thought that Nigeria cannot care for the artefacts. Instead, he wants people to see it as a possible catalyst for the tourism sector and much more. “The return of these artefacts could probably change what you are afraid of. People say there is no tourism, but the return of these works could improve what we have been looking for,” he said.

When asked where the returning artefacts should be, Ehikhamenor chose not to comment on it. “Next year would make it 125 years since these arts were looted, and a lot of things have happened between those years. That is something that would not be easy to untangle. Everybody has their department, and that is not a department that I want to comment on right now. All I want to do is speak to the western world and have them do what is right,” he said.