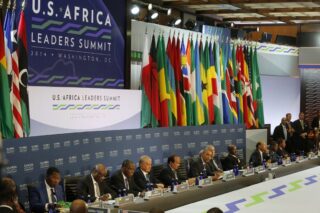 Why is the US bullish on Africa?

“The United States is all in on Africa’s future,” Biden told African leaders from 49 countries at a three-day summit in Washington last week. The US-Africa summit aims to position the United States as a partner to African countries amid competition with China, which has sought to expand its influence by funding infrastructural projects on the continent. Currently, Chinese trade with Africa is about four times that of the United States, and Beijing has become an important creditor by offering cheaper loans, often with opaque terms and collateral requirements, than Western lenders.

The US administration believes that Chinese and Russian activities in Africa could have negative long-term consequences for the continent, presenting an opportunity for these countries to challenge the rules-based international order, advance their narrow commercial and geopolitical interests, and undermine transparency and openness.

Officials of the US administration also focused their efforts to improve cooperation with African leaders. The summit resulted in several investment pledges including a 55 billion investment in health, and climate change, amongst other issues, and a $100 million fund for the Young African Leaders Initiative expansion.

The International Monetary Fund has agreed to a $3 billion loan to Ghana to get the West African nation’s debt under control, restore financial stability and help people most at risk from rising prices and other economic problems. Ghana has experienced more than 40 per cent inflation, growing debt, and a sharp decline in its cedi currency since the start of the year.

On a brighter note, new data from the Bank of Ghana shows that the Ghanaian cedi’s exchange rate versus the U.S. dollar bounced back from just over 14 units per dollar to 8 units on Friday the 16th of December. According to the report, the exchange rate experienced a 36% appreciation, from 14 units per dollar which earned the Cedi title of the worst-performing currency globally. The central bank attributed the cedis’ recent gains to a new set of monetary measures it has instituted. The currency’s resurgence appears to have been fueled by the announcement of the IMF loan.

MTN GlobalConnect announced that the world’s longest undersea cable, 2Africa, made landfall last week at Yzerfontein and Duynefontein in South Africa. The 2Africa cable will stretch 45,000 km (27,961,704 miles) long, and runs from Europe through the Atlantic Ocean and the Indian Ocean, going completely around the African continent, and then back into Europe via the Red Sea and the Mediterranean.

The cable will serve 33 markets and have at least 47 landing stations. The cable has a design capacity of up to 180 TBps, which is faster than Google’s Equiano cable. The system will deliver much-needed internet capacity, reliability, and improved internet performance across large parts of Africa; and will supplement capacity demand in the Middle East. The 2Africa cable is owned by a consortium that includes firms such as MTN GlobalConnect, Meta Platforms (Facebook), China Mobile International, Orange, center3, Telecom Egypt, Vodafone, and WIOCC.