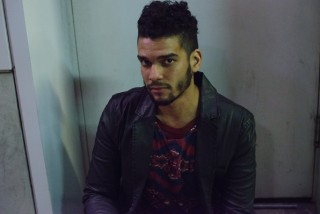 In recent rimes, the jua kali (informal sector workers) in Kenya have been drawing a lot of positive attention to their line of work. Just last month, the World Bank, through its Country Economic Memorandum report, said the country’s economy was largely dependent on innovation as well as the informal services sector (mostly comprising of the jua kali).

The word jua kali means fierce sun in Swahili but also translates to a person, businessman, or entrepreneur that can fix or practically do anything upon request. These types of workers have been around for a long time and have become a part of the Kenyan culture but who would have thought a Kenyan visual artist would consider them an inspiration for his work?

“Jua kali for me has been an inspiring point of reference whenever I think about my city and the resilience of the people that live there and the creativity that goes behind what they create and what they make,” says Tahir Carl Karmali, a Kenyan visual artist based in New York, who has exhibited creations featuring not only the jua kali but even the tools they work with as well as bits and pieces of materials splashed across the East African landscape.

Karmali has a Masters of Digital Photography degree and experiments with mixed media, installation and digital photography.

According to okayafrica, the jua kali inspires Karmali due to the fact that being out there, making things happen and earning in the informal services sector, is somewhat difficult. “From my experience and my understanding the whole philosophy behind jua kali and the whole idea of jua kali is about resilience, it’s making do with what we can because the bar of entry to certain businesses in Kenya and all over Africa can be really difficult,” he says.

According to Karmali, reactions to his work have been generally positive with a certain shock value, especially for those outside Kenya who have no idea what jua kali is or what they stand for. Karmali’s jua kali exhibition series is ongoing at the United Photo Industries Gallery in Dumbo, Brooklyn, USA till March 26, 2016.

Karmali is, however, not the only one who has attempted to introduce innovative ideas for the jua kali. Foremost Kenyan coder and CEO of Akirachix, Judith Owigar, has introduced the jua kali online website, giving informal sector workers the opportunity to be linked with potential customers who need their services.