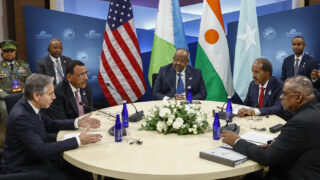 US-Africa Summit: Why the US is pushing for Chinese debt transparency in Africa

During the just concluded US-Africa Leaders Summit, the United States (U.S) hinted at plans to push for more transparency around the terms of the debt that African countries owe to the Chinese government. According to the Under Secretary of State for Economic Growth, Energy, and the Environment, Jose Fernandez, China inserted clauses in loans signed with some African nations that exclude or prohibit the publication of the loan agreements. Thus, citizens do not know what kind of agreement their governments have entered, the amount borrowed, or the interest rates. But the US will try to see how these countries can get out of their crushing debt problems with the Asian country.

In the cause of the last decade, China created aggressive investment inroads into the continent of Africa compared to other world powers like France, Russia, the United Kingdom, and the US. Last year, the International Institute for Sustainable Development (IISD) reported that China’s Ministry of Commerce created 25 economic and trade cooperation zones in 16 African countries. That gave it substantial investments on the continent during the pandemic. The registered zones attracted 623 businesses with a total investment of $735 billion at the end of 2020.

But the China debt burden is becoming too heavy for many emerging economies as some African countries are beginning to suspend or scrutinise contracts with Chinese firms.

While the latest move by the US would help emerging countries find solutions to their debt crisis with Beijing, it would also open new inter-trade channels for the US and Africa. For instance, with the introduction of its Trade and Investment initiative, Prosper Africa, the US would increase two-way trade with African nations through investments across Africa in partnership with local fund managers on the continent. The US will invest in small businesses and entrepreneurs that are advancing solutions to global challenges, including climate change and gender inequality/women’s empowerment.

According to Future Africa, one of the selected fund managers in Africa, “the U.S. government plans to commit $170 million, pending funding availability, that will be invested alongside U.S. and African companies and investors. These partnerships will boost African exports to the United States by $1 billion and mobilize an additional $1 billion in US investment across the African continent. More so, companies within the technology, tourism, agriculture, and sustainability industries will harness the opportunity to generate jobs, grow clean energy economies, and build resilient communities.

Key takeaways from the summit:

U.S.’s $55 billion investment in health, and climate change, amongst other issues

Additionally, a $1.33 billion annual investment would be made into the African health workforce from 2022 to 2024 to at least $4 billion by Fiscal Year 2025. This would help Africa close the gap in health workers, including clinicians, community health and care workers, and public health professionals.

The administration also plans to provide at least $1.1 billion to support African-led efforts in conservation, climate adaptation and energy transitions.

Nigeria and Rwanda have become the first African countries to sign the Artemis Accords, which facilitate collaboration and establish principles grounded in the 1967 Outer Space Treaty for safe, sustainable, and responsible exploration and use of outer space.

As signatories, Nigeria and Rwanda commit to guiding their civil space activities, including the public release of scientific data, responsible debris mitigation, and registration of space objects, amongst others.

The Accord now boast 23 signatories from every corner of the globe, representing a diverse set of space interests and capabilities. Existing signatories include Rwanda, Saudi Arabia, Singapore, Ukraine, the United Arab Emirates, the United Kingdom, and the United States.

The United States says it will support and work to realize a long-overdue African representation in international institutions, including supporting the African Union to join the G20 as a permanent member. This would give Africa, one of the fastest-growing regions of the world a voice in the body. Presently, South Africa is the only member of the AU and the G20.

Being a member will also allow some African countries to advance their interest regarding debt eligibility with G20 nations. It would afford them a firm say in major issues relating to the COVID-19 pandemic and climate change, a phenomenon rich countries are not taking enough responsibility for.

The fund aims to support innovative, diverse young African women and men to excel in a 21st-century economy and catalyze transformational change in their communities, countries, and continent. Launched in 2010, the YALI initiative is the U.S. government’s signature effort to invest in the next generation of African leaders.

Since 2014, the Mandela Washington Fellowship, the flagship program of YALI has had nearly 5,100 young leaders from every country in Sub-Saharan Africa participate in the Fellowship.

The Initiative on Digital Transformation with Africa (DTA)

The investment in Africa’s digital economy includes partnerships between Microsoft and Viasat to bring broadband to 5 million Africans, as well as training programs for African entrepreneurs, with a focus on women, to code and build the skills they need to start their own businesses and to secure top jobs with tech firms.