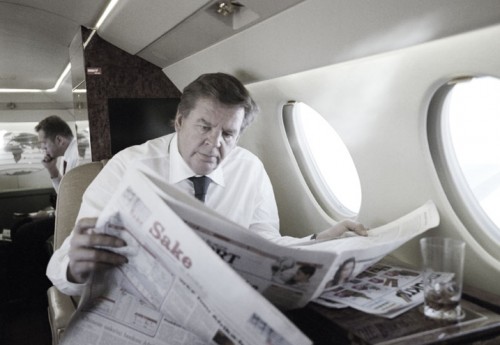 At Ventures Africa, we celebrate African success, free enterprise, the entrepreneurial spirit, and the rewards of hard work. In the inaugural issue of our magazine, we’ve attempted to briefly chronicle the stories of some of Africa’s greatest entrepreneurs and business leaders.

Here is a snippet of what to expect:

Johann Rupert inherited a successful luxury goods empire from his legendary father, Anton Rupert. But make no mistakes; Africa’s most venerable luxury tycoon is his own man.

Johann Rupert was born lucky. His father was Anton Rupert, the late South African tycoon who famously parleyed a ₤10 investment into one of the largest industrial conglomerates in South Africa- the Rembrandt Group. The conglomerate today spans luxury goods, finance, tobacco and mining interests among others, and is now headed by Johann who has built on the successes of his late father.

The empire Johann Rupert runs today was founded in 1941 by his father, the celebrated Anton Rupert who ventured into business by founding a small cigarette manufacturing operation in his garage with a ₤10 investment. That small cigarette companywas transformed into Rembrandt- a brand, which became incredibly popular among young South African smokers. By the 1950s Rembrandt was already one of the continent’s leading tobacco firms.

Anton spearheaded Rembrandt’s diversification from tobacco into the industrial and luxury branded goods sectors.  Rembrandt eventually split into two divisions- Remgro (an investment company with financial, mining and industrial interests) and Richemont (a Swiss-based luxury goods group). Today, these businesses collectively employ tens of thousands of people in 35 countries on six continents. Anton Rupert passed away in 2006, but Johann, his eldest son, has held the reins of the group.

After studying Economics and Company Law at the University of Stellenbosch, Johann Rupert, 61, worked for Chase Manhattan and Lazard Freres in New York for two and three years respectively. Using the experience he gained in America, he returned to South Africa in 1979 to found Rand Merchant Bank (RMB). RMB grew to become one of the most successful investment banking institutions in the country before it merged with Rand Consolidated Investments (RCI)- the investment-banking firm founded by GT Ferreira, Laurie Dippenaar and Paul Harris.

After the sale of his investment bank to RCI in 1984, Johann joined his father’s company, the Rembrandt Group where he assumed a senior executive position. In his bid to diversify the group from its base in tobacco and alcohol products, in 1988 he founded Compagnie Financiere Richemont, an investment holding subsidiary of the Rembrandt Group through which he acquired minority stakes in luxury brands like Cartier Monde SA, Alfred Dunhill, Rothmans International, Montblanc and Chloé. He was later on appointed as Vice Chairman of the Rembrandt group.

Today, Richemont is the 3rd largest luxury Goods Company in the world, employing over 21,000 people and its 2011 revenue over $6 billion.

Apart from his interests in tobacco, luxury goods and private equity, Johann is one of South Africa’s most recognizable wine entrepreneurs. He owns two of South Africa’s best-known vineyards, Rupert & Rothschild and L’Ormarins. He also owns one of the country’s most exclusive golf clubs and established the Franschhoek Motor Museum, which houses his personal collection of over 200 antique vehicles.

Johann Rupert is one of Africa’s most successful business leaders, and the numerous international awards he has bagged lay credence to that fact. He has been voted thrice as South Africa’s Business Leader of the Year by the CEO’s of the Top 100 Companies and has won innumerable other business awards both in South Africa and overseas.

Rupert has been actively involved in investing in young, budding entrepreneurs. He has famously provided seed funding to several young entrepreneurs engaged in diverse sectors. Many of his investments have been runaway successes, but some have been colossal failures. For example, in 2008 he invested in FireID, a tech startup which provided a cell phone encryption service. The company initially generated a lot of buzz in global media, but eventually failed and closed shop in 2011- barely three years later. But when a reporter asked him about his lost investment in the company, Rupert replied indifferently: “You win some; you lose some.”