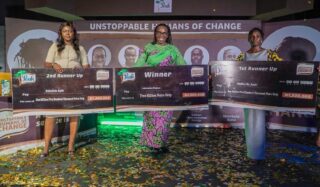 Unstoppable Humans of Change: Driving Change for a better Nigeria

Change is dynamic and the only constant thing in life. There are agents of change, people who are not afraid to go out into the world and make an impact, leaving indelible marks that will never be forgotten. These change agents understand the power of relationships, and they go the extra mile to impact lives by sharing their resources with the recipients of their philanthropy. They are unsung heroes without capes.

According to a survey of some residents of a few suburbs and Lagos slums, education is not a top priority for them due to the high poverty rate in the country, lack of social infrastructure, and social exclusion. These dwellers are more concerned with basic needs: food and shelter. The desperation to feed sometimes leads them into the traps of opportunists who take advantage of their situation to make quick and illicit money. Many get deceived under the guise of being offered better living conditions for themselves and their families, and they become victims of human trafficking, sex slavery, organ harvesting rackets, and cheap labour among others.

There are unsung heroes who have taken it upon themselves to bring about positive changes in the lives of people who are indigent and lack basic amenities. It is in recognition of this type of selfless service and the resilient Nigerian spirit that FrieslandCampina WAMCO, makers of the Peak Milk Brand, launched the Unstoppable Humans of Change initiative, aimed at celebrating unsung heroes who have positively impacted their communities.

Since its arrival in Nigeria, the Peak brand has encouraged Nigerians to reach for their peak. Taking it several notches higher, they decided to reward those who are striving hard to reach their peak in their various fields of endeavour. Ten individuals who have dedicated their lives to assisting others in the fields of education, technology, and social work were chosen among the thousands of entries received and awarded cash prizes. They were voted for based on the exceptional work they have done. The competition ended on an emotional note, with the top 10 finalists battling for the grand prize of N2,000,000, a year’s supply of Peak Milk, and mentorship sessions with industry experts.

First prize winner Aderonke Kujore is the founder of Tech Savvy Nigeria, a non-profit organisation that seeks to improve the literacy level in Nigeria using technology. Aderonke would like to be remembered as the Akoka girl who changed the face of education in Nigeria by setting up children’s libraries within walking distance from their schools or homes and making them technologically capable of accessing these libraries. Being exposed to more possibilities through books, these children are being positioned to lead effectively in the private and public sectors. She appealed to the government to provide internet connectivity in schools, thereby giving children even more learning opportunities.

According to Aderonke, “the prize money of N2,000,000 is humbling, yet gratifying, as it came at a time when I was seriously considering scaling down because the financial pressure was too much to carry. I sincerely appreciate this gesture from Peak Milk, and hope I can find other corporations that can help alleviate some of the financial burdens on me and get more children to benefit.”

Aderonke was not the only celebrated winner. Second-place winner Azuh Ify Chylian, founder of the Female Returned Migrant Network (FREMNET), was inspired by her own personal experience with human trafficking and is lucky to be alive to tell her story after spending several years in prison. She decided to help other victims who do not understand what they are getting themselves into by accepting proposals that are too good to be true to migrate and work abroad. She also helps those who have been successfully rescued to be reintegrated into society and become useful to themselves and their families. According to Azuh, one of the greatest challenges faced by human trafficking victims is stigmatization.

On winning the second prize, Azuh said, “I am super excited and motivated to do more, knowing that I am recognized for my work and loved for it. It is also for growth and an opportunity to collaborate and create even more value”

For FrieslandCampina WAMCO, the decision to undertake this initiative to celebrate unsung heroes is borne out of a need to celebrate humans who are full of empathy and demonstrate this by effecting changes in the lives of indigent Nigerians. According to Omolara Banjoko, Marketing Manager, Peak Brand, “There are certain people on earth that exist simply to nourish the lives of those around them.”

“These are full-time heroes without capes, and we see them as Humans of Change at Peak; we recognize and appreciate them through this campaign by giving back to them,” Banjoko added.

Some change agents are inspired by personal experiences, like in the case of Abimbola Ajala, founder of Lend A Hand for Africa and third-place winner of the Unstoppable Humans of Change campaign. Abiodun, who grew up in a suburb of Lagos, experienced hunger, illiteracy, and cultism. “As a young child, growing up without hope is the worst thing that can ever happen to anyone.

I saw young children drop out of school because of a lack of funds, which affected their lives’ progress. I knew when I got out of all that I saw and experienced that I wanted to be part of the reason children won’t face such. I wanted to give them a better narrative and shine the light on their path, making sure that through my actions, we can reduce the number of school dropouts, teach children the importance of education, and birth greatness,” Ajala said.

According to Banjoko, with the Unstoppable Humans of Change campaign, the Peak Brand will be giving these change agents the recognition and accolades they deserve and a platform to shine as they amplify the good works that they do. “The Peak Brand as an organization will continue to identify with this set of heroes as they drive change in Nigeria through their selfless work, and we encourage everyone to strive to be the change that our society needs for the growth and development of the nation.”