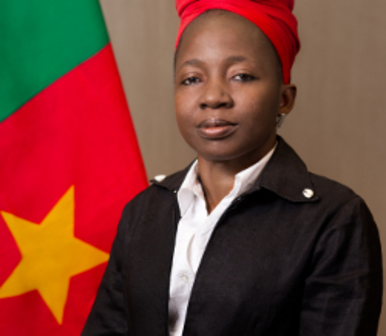 In a historic 2011 campaign, Kah Walla, an entrepreneur, activist and elected official in Cameroon, ran for the country’s Presidency. She was the country’s first female presidential candidate and she ran the ground-breaking ‘The Time is Now’ campaign as well as the Cameroon Ô’Bosso citizen movement to register voters and encourage electoral participation. But long before emerging as a political contender, Kah Walla made her mark as an entrepreneur, Founder and CEO of Strategies!, the nation’s leading consulting firm in leadership and strategy development.

After studying in the United States and gaining an MBA, Kah Walla returned home to Douala, Cameroon where she worked as the Marketing & Technical Director then General Manager for a small consulting firm. When mismanagement and poor financial handling sent the company into the ground, Kah took a bold step and begin her own consulting firm.

That was 18 years ago. In that time Strategies! has grown from a local consulting business to one of international repute, partnering with major international development organisations like World Bank and advising multinationals like Standard Chartered Bank and Shell, and generating over 80 percent of its turnover outside Cameroon. Kah Walla is renowned for her work both at a high level and at the grassroots. She is a board member of the World Entrepreneurship Forum and the American Chambers of Commerce and is the National President of the Cameroon People’s Party. She shares her story as an entrepreneur, community leader and politician in this exclusive interview with Ventures Africa.

VW: Let’s start with your entrepreneurial journey – why consulting? And what were some of your biggest successes and early challenges?

KW: I wouldn’t say I chose consulting, it more so chose me. I actually started working at a consulting firm in Cameroon and after a while I was called on to be the General Manager for the company. Unfortunately I hadn’t been informed about the many financial woes of the company and after just two years there the company had to close down. At this point although I had seen a lot of mismanagement and wrong things at the firm, I had also seen a lot of potential for the industry so I decided to strike out on my own. I began in my father’s dining room; that was my office. This was 1999 when there were no cell phones so my staff and I went to the pay phone down the street to call our clients! Actually (laughing) we made a deal with the guy that stayed near the phone to take messages for us when our clients called back! So the first two years were very tough but as time went on, we began to build our client base and the business began to grow. One of our biggest successes came when one of our consultants, Sophie asked why we were just working in Cameroun. She proposed going to Chad to seek out clients, a trip that would cost $3000, money we couldn’t afford to waste. We eventually agreed and it turned out to be the best decision we ever made. That same year, 10 percent of our revenue came from Chad. Since that time, we have done more and more international work so much so that over 80 percent of our business is now outside Cameroun. That was definitely one of the best decisions we made, I owe Sophie a lot.

VW: You are not only an entrepreneur but also a community organiser. How did you make that transition, were you always involved with the community?

KW: Actually I was very fortunate because my work led me to the right organisations and contacts as I consulted a lot for international development organisations. I had become heavily involved in making the business environment friendlier for people at the grassroots so I began organising community projects for my constituency. One project was improving the business environment in Sandaga Market in Douala. These women were regularly harassed and oppressed by the men and many local government officials. We were able to train more than 350 women on business management, basic sanitation, understanding the taxation system and knowing what they should expect from their city officials. Most importantly, they learned how to organise themselves to advocate for their rights. I think when the market women approach the council officials there now (laughing) they tremble a bit!

VW: You transitioned from life as a successful entrepreneur into politics; a move that most people refuse to make. Many prefer to create change from ‘outside’. Is going into politics the only way to effect change?

KW: Well, I too was once guilty of that thinking. I used to say to myself back when I started my business, “anything but politics!” But it became clear to me as time went on and as I ran my business that at the end of the day, I always came up against the government. The government was always somehow a stumbling block or obstacle to running my business effectively whether in form of its policies, operations or officials. It became clear that I couldn’t make change from the outside. Today I challenge educated Africans that are looking for change and trying to affect it with their business and NGOs, “how can you change a society with a bad government? Show me one country that has been able to turn its economic situation or hardships around with a bad government in place, none!” I believe very strongly that only the state has the power, reach and legitimate authority to affect the kind of widespread change that’s needed.

VW: Tell us a bit about the ‘Time is now’ Campaign; why did you choose that title?

KW: We felt like this title was highly appropriate for the times. Experience and recent history tell us that when you have a bad, corrupt government that’s not doing its job and a highly educated young population that’s unemployed; a revolution is coming. Tunisia and Lybia have demonstrated this. There will either be an explosion with mass violence, or a young leader that emerges and uses violence to take the government down will easily find support amongst disgruntled citizens. Why wait for that to happen before change comes? I believe that any non-violent source of change is good so we’re trying to push that the democratic process is the source we need. There is no better time for this than now.

VW: Well said! You didn’t win the last time but will you run again? What would you do differently this time?

KW: The Cameroonian presidential term is 7 years, which is a long time but I would definitely run again and this time, I would raise more funds. Fundraising was certainly a big issue but what people don’t realise is that it’s not that the citizens are voting for the wrong people, they are simply not voting! During elections only 25 percent of Cameroonians voted because they believe that the elections are already rigged so what’s the point? So the reality is that we are not just campaigning for change, we also have to really engage with people on a personal level to teach them that their democratic voice does count and rebuild the trust. It is unbelievable just how expensive this process of grassroots community organising is.

VW: What would your top 3 priorities be if you became president?

KW: First, I would change the constitution, we need one that is reflective of a new democratic era; I would also work to turn the informal sector, which is currently 90 percent of the Cameroonian work force, into a dignified job market; I would also focus on the two key social systems which are health and education. These things wouldn’t necessarily be done one after the other, they would be simultaneous. Through my grassroots engagement with youths, I found that many of them were involved in the informal sectors so I would go about legitimising those jobs and making sure things like micro-insurance and social services were available to them. We also have new, innovative ideas on how to tackle the health sector. We’re looking at a situation where health centres are integrated with other social systems such as schools, market places etc. That way these centres can provide medical care as well as health education and preventive services to the people in a way that is tailored to their unique community needs.

VW: You have many great accomplishments in business and politics, well done! What aspects of your background, mentors or education, shaped your thinking about the future?

KW: I grew up surrounded by strong women and a great family. My paternal grandmother was a very strong woman, I remember her being unstoppable. She never allowed anyone to say that because she was a woman she couldn’t achieve something she wanted. She never let what society was going to think of her stop her. My maternal grandmother was also a strong woman and an entrepreneur; I grew up watching the way she ran her business. She was also a seamstress so she taught me, whatever you do, do it in style! (laughs) My mother was also a very strong woman in her own right; she was very educated and led a major international NGO for many years. My dad always saw me as his first girl and able to achieve anything I wanted. Even when people tried to remind him that I was a girl, his response was “So what? She can do anything that she wants”. So I was very blessed growing up with an extremely strong sense of love and that there was really nothing impossible for me. It has made the biggest difference for me.

VW: You have a strong relationship with Vital Voices, what have been the benefits of this partnership?

KW: We have a very strong multi-faceted relationship with them. I’ve participated in some of their programmes and I’m a part of their global leaders’ network which brings together women across Africa making a difference. On the other hand, my firm also provides services for them so they are my clients. We help them develop organisational strategies and plan for the future. We were an ideal partner for them because on engaging us they realised that the community organising work that we’ve done gave us the in-depth grassroots knowledge and reach that they needed for their activities. But we also brought to them our ability to think strategically and plan for the future. Through Vital Voices, the work we were doing also got the needed recognition. I got to shake former US President, Bill Clinton’s hand for the organising work we did with market women! It is certainly a very mutually beneficial relationship.

Like many of her heroes, Kah Walla is taking a stand for the future of African business and African politics. Her objective today: Effecting political change in Africa, to build the systems of governance that will enable the continent achieve its incredible potential.