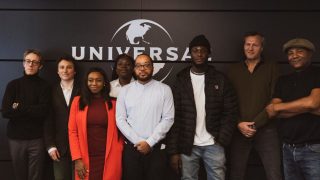 With more than a decade of experience in developing young African talent, Aristokrat represents the spirit and the sound of New Afrika and is best known for discovering and developing Burna Boy, one of the biggest acts in the African music industry today.

The partnership consists of both a label and publishing deal through Universal Music Publishing Group (UMPG). Both parties will work closely together to discover and develop exciting new African talent, giving artists and songwriters the opportunity to reach global audiences with support from Universal Music Group companies around the world.

The first recording artists signed to the label are Kel P, Jujuboy Star, and Tneeya. Kel P is a highly respected Nigerian producer, who worked with Burna Boy on his Grammy-nominated album African Giant, and recently worked with Wizkid on his Starboy, The Soundman Vol 1 EP. Jujuboy Star is a Nigerian singer, songwriter, and producer. T’neeya is a Cameroonian singer and songwriter. All Aristokrat Records artists will be signed and distributed in partnership with Caroline France, a Universal Music France label.

In addition, the publishing partnership with UMPG will enable Aristokrat to further discover and develop African songwriters, artists, and producers globally, and to maximize creative and collaborative opportunities for its talent worldwide. The first publishing signings are Kel P, Jujuboy Star, and Saszy Afroshii, a fast-rising female producer from Lagos.

In announcing the partnership, Olivier Nusse, CEO, Universal Music France, said, “I am very proud that Aristokrat Group has chosen Universal Music France as its strategic partner to reach a global audience. We are convinced that Aristokrat represents the sound of New Africa and we look forward to working with our UMG labels globally to ensure that people around the world, can discover and dance to this sound!”

“Aristokrat is one of the most important voices in Africa right now. The quality of their A&R, their artistic and creative vision, and entrepreneurship is both unique and progressive,” said Bertil David, MD, Universal Music Publishing France. “We are very proud at UMPG to be able to partner with Aristokrat to help them achieve the global presence they deserve.”

Founder and CEO of The Aristokrat Group Piriye Isokrari described the deal as “an exciting time” for African musicians, producers, and companies. “Over the last decade, we’ve been at the forefront of cultivating this sound and building sustainable structures locally and we are happy to be able to bring our music and culture to the global market through this partnership with the Universal Music Group,” the chief executive said.

A Vivendi company, Universal Music Group (UMG) is the world leader in music-based entertainment, with a broad array of businesses engaged in recorded music, music publishing, merchandising, and audiovisual content in more than 60 countries. Featuring the most comprehensive catalog of recordings and songs across every musical genre, it identifies and develops artists and produces and distributes the most critically acclaimed and commercially successful music in the world. Committed to artistry, innovation, and entrepreneurship, UMG fosters the development of services, platforms, and business models in order to broaden artistic and commercial opportunities for artists and create new experiences for fans.

Meanwhile, Lagos-based The Aristokrat Group is an African Media & Entertainment Company headquartered founded in 2009. It has expanded at a steady rate and is now present throughout the entire media and entertainment value chain. The Group currently houses a Record label, Touring and Event Production Company, Film and Television Production Company, Music Publishing Company, and Digital Media Company. The Aristokrat Group also offers a wide range of Multimedia & Entertainment Services to artists, labels and corporate brands.