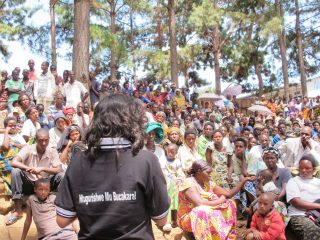 The U.N.High Commissioner for Refugees is calling for the urgent and immediate release of refugees and asylum seekers, warning that unlawful and arbitrary incarceration  is putting them and the general public at heightened risk of coronavirus (COVID-19).

Refugees and asylum seekers fleeing from war and persecution are treated like criminals and are detained in some countries without due legal process.

According to the U.N. agency, these countries are reportedly using the pandemic as an excuse to lock up refugees and asylum seekers for longer periods of time.

Unlawful detention of refugees is not restricted to countries in conflict such as Libya, but is also widely used as an administrative procedure in various regions in Europe, Africa, Asia and the Americas UNHCR says.

The U.N. agency highlights that refugees and asylum seekers are forced to live in overcrowded and unsanitary conditions with little or no access to medical care and clean water. In such settings, social distancing is impossible.

UNHCR spokesman Charlie Yaxley tells VOA the risk of a catastrophic outbreak of COVID-19 in one of these detention centers is great and could jeopardize public health.

“Should somebody become infected with the virus, it could potentially spread quickly amongst the other detainees, but also amongst those who work and guard the centers themselves and therefore potentially risking further spreading even outside the centers,” he said.

Adding that detention of refugees should be a measure of last resort, and children should never be held in immigration detention as it can never be considered to be in the child’s best interest.

However, the UNHCR applauded the positive efforts made by a number of States, which have released refugees and asylum-seekers from detention during the pandemic.

The UNHCR called on the governments to expand and implement community-based alternatives to detention, including other options for newly arriving refugees and asylum seekers.

Conditions at the detention centres should be improved as alternatives are being prepared, while giving UNHCR access to asylum seekers and refugees held in these locations.

Refugees and asylum seekers exercising their fundamental human right to seek asylum are the most vulnerable during pandemic. It is important that they be treated as part of the community and be given access to basic infrastructures and necessities.