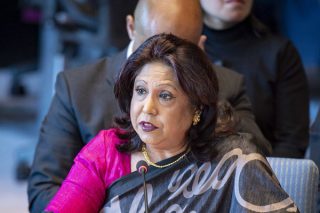 The UN effort to eradicate sexual violence committed during wartime has welcomed the release of 78 women and 50 children by an armed group in South Sudan. These women and children were amongst over 500 abducted between April and August 2018 and subjected to sexual slavery and forced marriage.

They have been held in military bases by pro-Riek Machar, Sudan People’s Liberation Army in Opposition (SPLA-IO RM) in the Western Equatoria region of South Sudan. Now they are being supported by the United Nations and its civil society partners and referred to medical and psychosocial support structures.

The plight of these women and children, many of whom were reportedly subjected to systematic and brutal forms of conflict-related sexual violence is the story of thousands of women and children who have become victims of conflict situations in many countries like Nigeria, Mali, Iraq, Somalia, Liberia, Burkina Faso, DRC, etc.

In a statement issued on Tuesday 4th February 2020, Pramila Patten, Special Representative of the Secretary-General on Sexual Violence in Conflict said, “This release is an encouraging and long-awaited development, in a context of prevailing insecurity and immense operational, logistical and resource constraints”.

Following this development, the UN should build on this momentum to advocate for the release of the remaining women and children who continue to be held by armed opposition forces across Western Equatoria. This will sustain calls for accountability for sexual violent crimes in order to prevent and deter future violations as well as create headway in ending the culture of violence against women and children.

The culture of violence against women and children especially conflict-related sexual violence has inflicted huge economic, political and social losses to individuals, households, and nation-states. It has placed very strong implications for global peace and security, efforts to eradicate poverty and promote inclusive, sustainable development. As it continues to be an obstacle to achieving the United Nations Sustainable Development Goals which address equality, development, peace as well as to the fulfilment of women and girls’ human rights.

The attainment of the Sustainable Development Goals (SDGs), and its promise to leave no one behind cannot be fulfilled without putting an end to violence against women and children. Hence, given the urgent need to address this culture of violence against women and children, it is important that quick and effective steps are taken in order to prevent serious consequences for the international community.